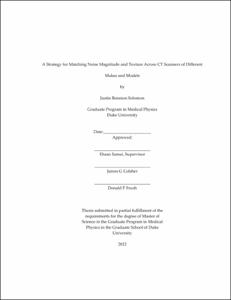 <bold>Purpose: </bold> The fleet of x-ray computed tomography systems used by large medical institutions is often comprised of scanners from various manufacturers. An inhomogeneous fleet of scanners could lead to inconsistent image quality due to the different features and technologies implemented by each manufacturer. Specifically, image noise could be highly variable across scanners from different manufacturers. To partly address this problem, we have performed two studies to characterize noise magnitude and texture on two scanners: one from GE Healthcare and one from Siemens Healthcare. The purpose of the first study was to evaluate how noise magnitude changes as a function of image quality indicators (e.g., "noise index" and "quality reference mAs") when automatic tube current modulation is used. The purpose of the second study was to compare and match reconstruction kernels from each vendor with respect to noise texture.

The second study was performed by imaging the American College of Radiology CT accreditation phantom with a comparable acquisition protocol on each scanner. Images were reconstructed using filtered backprojection and a wide selection of reconstruction kernels. We then estimated the noise power spectrum (NPS) of each image set and performed a systematic kernel-by-kernel comparison of spectra using the peak frequency difference (PFD) and the root mean square error (RMSE) as metrics of similarity. Kernels that minimized the PFD and RMSE were paired.

<bold>Results:</bold> From the fist study, on the GE scanner, noise magnitude increased linearly with noise index. The slope of that line was affected by changing the anatomy of interest, kVp, reconstruction algorithm, and convolution kernel. The noise-noise index relationship was independent of phantom size, slice thickness, pitch, field of view, and beam width. On the Siemens scanner, noise magnitude decreased non-linearly with increasing quality reference effective mAs, slice thickness, and peak tube voltage. The noise-quality reference effective mAs relationship also depended on anatomy of interest, phantom size, age selection, and reconstruction algorithm but was independent of pitch, field of view, and detector configuration. From the second study, the RMSE between the NPS of GE and Siemens kernels varied from 0.02 to 0.74 mm. The GE kernels "Soft", "Standard", "Chest", and "Lung" closely matched the Siemens kernels "B35f", "B43f", "B46f", and "B80f" (RMSE<0.07 mm, PFD<0.02 mm<super>-1</super>). The GE "Bone", "Bone+", and "Edge" kernels all matched most closely to Siemens "B75f" kernel but with sizeable RMSE and PFD values up to 0.62 mm and 0.5 mm<super>-1</super> respectively. These sizeable RMSE and PFD values corresponded to visually perceivable differences in the noise texture of the images.

<bold>Conclusions:</bold> From the first study, we established how noise changes with changing image quality indicators across a clinically relevant range of imaging parameters. This will allow us target equal noise levels across manufacturers. From the second study, we concluded that it is possible to use the NPS to quantitatively compare noise texture across CT systems. We found that many commonly used GE and Siemens kernels have similar texture. The degree to which similar texture across scanners could be achieved varies and is limited by the kernels available on each scanner. This result will aid in choosing appropriate corresponding kernels for each scanner when writing protocols. Taken together, the results from these two studies will allow us to write protocols that result in images with more consistent noise properties.