Modeling and Control of an Equipment Isolation System for Critical Facilities 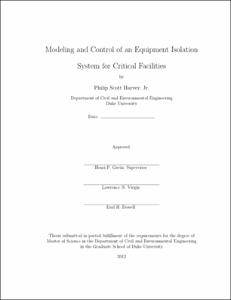 The primary focus of this thesis is on the modeling and control of a high performance vibration isolation platform used in the protection of mission-critical equipment. The equipment isolation system (EIS) consists of a pair of frames&mdash;the bottom-frame contains four concave-up bowls, the top-frame contains four concave-down bowls&mdash;between which four rigid steel balls can roll, effectively decoupling the top-frame (and equipment) from the base excitation. In order for the four balls to remain in contact with the dishes during times of large angular rotation, the platform is assumed to conform to a saddle shape. Developing a high-fidelity analytical model to capture the nonlinear nature of the EIS requires (i) enforcement of kinematic rolling constraints to the translational and rotational dynamics of the platform center, (ii) precise measurements of the bowl profiles and an accompanying parameterized model, and (iii) calibrating a linear-viscous damping model to experimental free-responses. To this end, nonholonomic equations of state are found from the d'Alembert-Lagrange principle which incorporates velocity constraints via Lagrange multipliers. The bowl profiles are measured using high-resolution photogrammetry and establish the system's potential energy function. Bowl shape parameters and damping parameters are optimized using a Levenberg-Marquardt least squares algorithm; the damping rate is shown to depend upon the mass of the isolated object.

To demonstrate the capabilities of the proposed model, numerical simulations are performed and compared to laboratory results. For an undamped free-response, energy is conserved while, for the damped free-response, non-zero displacement equilibria exist. It is shown that for the non-quadratic potential energy function of this particular system, free response trajectories are strongly sensitive to slight perturbations in initial conditions and that the system is, in fact, chaotic.

In most EISs, additional damping suppresses isolator displacements but may significantly increase the accelerations sustained by the isolated object. To demonstrate the potential benefits of semi-active vibration suppression, control theory is used to compare existing techniques to the optimal solution. This thesis presents a method to optimize control trajectories for systems subject to state and control inequality constraints decentralized in terms of each control. Optimal Lagrange multipliers enforcing the inequality constraints may be found at any time through Pontryagin's minimum principle. In so doing, the set of differential algebraic Euler-Lagrange equations are transformed into a nonlinear two-point boundary-value problem for states and costates whose solution meets the necessary conditions for optimality. The optimal performance of inequality constrained control systems is calculable allowing for comparison to previous, sub-optimal solutions. The method is applied to the control of time-lagged damping forces in a linearized EIS subjected to constraints imposed by the physical implementation of a particular controllable damper. Two cases are investigated: a single-degree-of-freedom isolator with one actuator and a three-degree-of-freedom system actuated by three devices. Potential improvements in terms of acceleration response are shown to be achievable, for which parameterized control laws are proposed over varying input excitation frequencies.