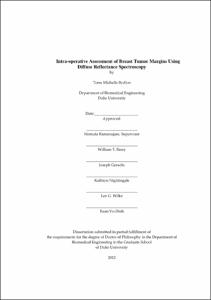 Breast cancer is one of the leading causes of death every year in the United States for women. Breast conserving surgery (BCS) is one treatment option for these patients where achieving tumor-free surgical margins is desired to avoid local recurrence [1, 2]. Unfortunately, as many as 17.7-72% of patients undergoing BCS require repeat surgeries due to a close or positive surgical margin diagnosed post-operatively [3-11]. Histopathology is the current gold standard for determining surgical margin status; however, given the large volumes of resected breast tissue it is not feasible to section the entire specimen. High re-excision rates and limited histopathological sampling of the tissue represent a significant unmet clinical need for margin assessment for both the surgeon and pathologist. Quantitative diffuse reflectance (DR) spectral imaging has been shown to be a promising tool for interrogating tumor margins but patient and surgical factors have to be accounted for in order to fully exploit the discriminatory capability of the technology. The objective of this work was to characterize an instrument for margin assessment and to evaluate the effects of inter-patient variability and surgical and excisional factors on quantitative tissue optical properties, to devise strategies to exploit optical contrast for the detection of positive (<2mm) tumor margins. In addition, the performance of the spectral imaging platform was evaluated.

The DR spectral imaging device utilized in these studies consisted of a Xenon lamp, a multi-channel imaging fiber-optic probe, an imaging spectrograph, and a 2D charge-coupled device (CCD) [12]. The instrument was found to extract quantitative optical parameters related to tissue micro-morphology with <15% error. Cross-talk at the tissue surface was <1% when the spacing between adjacent channels was 10mm and the sensing depth of each channel was found to be 0.5-2.2mm, an appropriate depth for identifying close and positive tumor margins. Reproducibility of the imaging protocol was best when the probe was interfaced with lumpectomy specimens from the side; this methodology was maintained for all measurements from lumpectomies in this dissertation.

If the purpose of the spectroscopy tool is to provide a differential diagnosis of benign versus malignant tissue, there must be an understanding of how excision of the tissue affects the optical properties over time, and how differences in surgical techniques affect optical properties. DR spectra were acquired 17±4 minutes post-excision from 12 incised mastectomies and from the surface of 10 lumpectomies 7±3 minutes post-excision. A linear longitudinal model was used to fit the data and obtain a rate of change for the tissue parameters. In lumpectomies, [&#946;-carotene], <&#956;s'>, and [&#946;-carotene]/<&#956;s'> had the lowest percent change (<14%) over 30 minutes; total hemoglobin concentration ([THb]) and [THb]/<&#956;s'> had higher percent changes (>40%) over 30 minutes; hemoglobin saturation (HbSat) showed non-linear changes making it a poor variable for ex vivo margin assessment; and LymphazurinTM concentration (denoted as [LymphazurinTM]) changed more than 200% in 30 minutes. Although the percent error in [LymphazurinTM] was high, all other tissue parameters could be quantified with <3.3% error even when Lymphazurin<sup>TM</sup> was 80&#956;M. No significant difference was found between benign and malignant rates of change, and baseline values were not significantly correlated with elapsed time post-excision. Initial values from benign non-cauterized mastectomy (n=13) and cauterized lumpectomy (n=59) sites were compared to assess the effect of cautery. [THb] was the only parameter that was significantly higher in the cauterized lumpectomies (p=0.013) compared to non-cauterized mastectomies.

The work in this dissertation shows the feasibility of using an optical device for margin assessment and that [&#946;-carotene] and [&#946;-carotene]/<&#956;s'> emerge as important variables for differentiating negative and close/positive margins. These two parameters were likely most important since they were least affected by kinetics, cautery, and the presence of LymphazurinTM.