Capitalizing on Cities: The Diffusion of Neoliberal Urban Policies in China 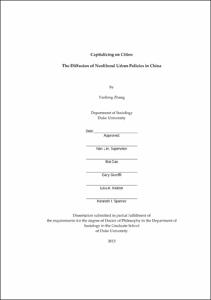 The global diffusion of neoliberal economic policies is one of the most significant events in modern history. This research applies current knowledge on policy diffusion to the analysis of the diffusion of two major neoliberal urban policies among Chinese cities, namely land banking and privatization of urban infrastructures. Both policies are believed to have contributed greatly to the rapid growth of China's urban economy, and reflect the idea of capitalizing a city's tangible assets and utilizing market institutions to manage them so as to achieve economic gains.

Borrowing insights from existing diffusion theories developed by scholars from different background, this research explores the determinants of the policy innovation decisions by utilizing three theoretical models: (1) The internal determinants model, which presumes that the factors causing a local state to adopt a new policy are political, economic, and social characteristics of the local state. (2) The regional diffusion model, which posits that the geographical proximity affects diffusion by encouraging emulation and competition among neighboring states. (3) Institutional diffusion model, which proposes that a new policy may be adopted to prove the legitimacy of the organization, to cope with environment uncertainties by modeling others, to conform to the will of other organizations on which the adopters depend.

This study emphasizes the role of the Chinese states, both at the central and local levels, in building neoliberal market institutions. It pays particular attention to the effects of provincial governments' pressure, and shows that local states' dependency on higher level authorities has limited the effectiveness of such interventions. Moreover, I highlight the influence of horizontal intergovernmental relations, such as competition and emulation, on the diffusion processes, and argue that it is an important factor that has promoted the national-wide expansion of neoliberal policies. The results of this study enrich our understanding on how local policy makings are influenced by complex intergovernmental relations, and how do local states balance between local economic interests and political loyalty to higher levels when they formulate local development agenda.