Mechanisms of Deep Brain Stimulation for the Treatment of Parkinson's Disease: Evidence from Experimental and Computational Studies 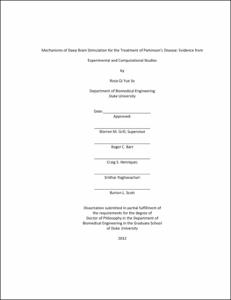 Deep brain stimulation (DBS) is used to treat the motor symptoms of advanced Parkinson's disease (PD). Although this therapy has been widely applied, the mechanisms of action underlying its effectiveness remain unclear. The goal of this dissertation was to investigate the mechanisms underlying the effectiveness of subthalamic nucleus (STN) DBS by quantifying changes in neuronal activity in the basal ganglia during both effective and ineffective DBS.

Two different approaches were adopted in this study. The first approach was the unilateral 6-hydroxydopamine (6-OHDA) lesioned rat model. Using this animal model, we developed behavioral tests that were used to quantify the effectiveness of DBS with various frequencies and temporal patterns. These changes in behavior were correlated with changes in the activity of multiple single neurons recorded from the globus pallidus externa (GPe) and substantia nigra reticulata (SNr). The second approach was a computational model of the basal ganglia-thalamic network. The output of the model was quantified using an error index that measured the fidelity of transmission of information in model thalamic neurons. We quantified changes in error index as well as neural activity within the model GPe and globus pallidus interna (GPi, equivalent to the SNr in rats).

Next, we investigated the effects of different temporal patterns of high frequency stimulation. Stimulus trains with the same number of pulses per second but different coefficients of variation (CVs) were delivered to the PD rat as well as PD model. 130 Hz regular DBS was more effective than irregular DBS at alleviating motor symptoms of the PD rat and improving error index in the computational model. However, the most irregular stimulation pattern was still more effective than low frequency stimulation. All patterns of DBS were able to suppress the pathological low frequency oscillations present in the GPe and SNr/GPi, but only 130 Hz stimulation increased high frequency 130 Hz oscillations. Therefore, the suppression of pathological low frequency neural oscillations was necessary but not sufficient to produce the maximum benefits of DBS.

Therefore, results from this dissertation support the hypothesis that the underlying mechanism of effective DBS is its ability to entrain and regularize neuronal firing, therefore disrupting pathological patterns of activity within the basal ganglia.