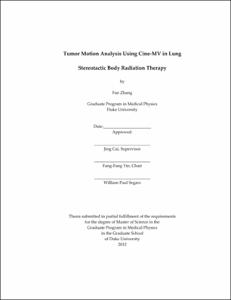 Probabilistic planning is an evolving approach for tumor motion management in which reproducibility of probability distribution function (PDF) of tumor motion is critical yet unclear. Aim of the first study is to evaluate the reproducibility of tumor motion PDF in stereotactic body radiation therapy (SBRT) using cine megavoltage (MV) images. External surrogate is used clinically in 4DCT imaging and radiation treatments for respiratory motion monitoring. However, studies have shown questionable correlation between external surrogate motion and internal tumor motion. Thus, Aim of the second study is to evaluate the correlation of external surrogate motion and internal tumor motion from a statistical point of view.

20 lung cancer patients who underwent SBRT treatment using 3D conformal technique were included in our study. During simulation, 4DCT scan assisted with RPM system was done. Cine MV images acquired during treatments were collected to extract tumor motion trajectories. For each patient, tumor motion PDFn was generated using 3 "usable" beams for each fraction. Patients without at least 3 "usable" beams were excluded. PDFn reproducibility (Rn) was calculated using the Dice Coefficient between PDFn to a "ground-truth" PDF (PDFg). The mean of Rn (Rm) was calculated for each patient and correlated to mean tumor motion rang (Am). Change of Rm during the course of SBRT treatments was also evaluated.