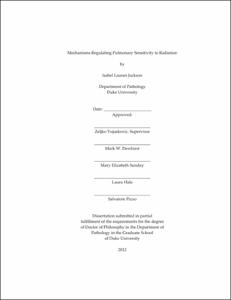 At the present time, here is no approved medical countermeasure (MCM) for mitigating or treating pneumonitis/fibrosis following acute radiation exposure. Since it is neither ethical nor feasible to evaluate potential MCMs against radiation injury in the clinical setting, the FDA permits MCM licensure under an alternative drug development pathway ("Animal Efficacy Rule") that relies on the predictive validity of animal models. The purpose of the current project was to design a research platform that addresses many of the critical knowledge gaps associated with successful adherence to the FDA Animal Rule.

In these studies, we evaluated the dose-response relationship for survival and function injury among CBA/J, C57L/J, and C57BL/6J mouse strains. These strains were previously identified to represent the full spectrum of pulmonary pathology associated with acute radiation exposure to the thorax. We next evaluated ultrastructural pathology to identify differences in tissue response among strains as early as twenty-four hours after radiation. Global differential gene expression analysis was utilized to identify the major signaling pathways and genes associated with development of radiation pneumonitis and/or fibrosis by exploiting the phenotypic differences in radiation-injury among strains. Genes with significant differences were validated by quantitative real-time PCR and their protein products validated by western blot. Finally, we performed longitudinal analysis of hypoxia-associated gene expression to elucidate the natural history of disease progression in "fibrosis prone" C57BL/6J mice.

In these studies, we identified significant differences in the dose-response, temporal onset, disease progression, and pathologic manifestations of radiation lung injury among murine strains. The severity of ultrastructural damage at twenty-four hours also differed among strains indicating the early tissue response to the radiation insult was dissimilar. A significant difference was found in gene expression among strains. The most interesting differences were associated with the acute-phase response, iron homeostasis, cell cycle/proliferation, and cell death. Lastly, hypoxia-associated gene expression, including HIF-1alpha; and HIF-2alpha; mRNA and protein stabilization, was dynamically altered during the temporal course of radiation pathogenesis in the "fibrosis-prone" C57BL/6J mice. As the C57BL/6J strain is more "resistant" to radiation-induced lung injury, a better understanding of the pathways involved in tissue response to radiation in this strain might elucidate the mechanisms that make the lungs of this strain significantly more radiotolerant than their counterparts.

The research platform developed in this project provides essential information to interpret and define the complex interrelationships in clinically relevant models of the human response to potentially lethal irradiation and treatment. The overall goal is to provide a rigorous scientific platform for MCM development under the Animal Efficacy Rule with reasonable expectation that MCMs acquired for the Strategic National Stockpile will effectively prevent, treat, or mitigate radiation-induced lung injury and improve survival among the exposed population.