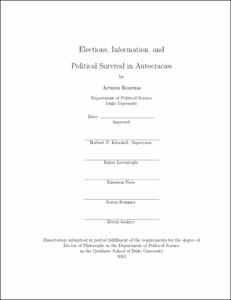 Chapter 2: A Ballot Under the Sword: Political Security and the Quality of Elections in Autocracies. What explains the democratic quality of elections outside established democracies? We argue that when a government does not have to convince the opposition of its wide support in the society, it holds repressive elections. Conversely, when a government needs to send a strong signal about its popularity, it takes a riskier strategy of holding more competitive, and hence more informative elections. Using cross-national panel data, we find that the incumbents facing political insecurity -- measured through the incidence of economic crises and coup threats -- tend to hold higher quality elections than their more secure counterparts. In addition, via structural equation modeling, we find evidence that economic crises affect the quality of elections only indirectly through increased political insecurity. These findings reject the conventional view that autocrats use electoral repression when they are afraid of losing due to low expected support. This analysis has important implications for modernization theory and for understanding the role of political and economic instability in the democratization process.

Chapter 3: The Calculus of Dissent: Rigged Elections, Information, and Post-Election Stability. Why do some elections result in concession speeches while others spiral into protests, riots, and conflicts? This paper draws attention to the informational content of the electoral process and its outcome. We argue that elections induce stability when they communicate that the winners are truly popular and derive several novel predictions as to when such communication can succeed or fail. First, unfair elections lead to instability only if they are won by slim margins. Second, excessively large victory margins increase instability \emph{irrespective} of the unfairness of elections. The theory is then applied to explain the incidence of post-election protests across the world and the patterns of mandate denial in sub-Saharan Africa. We find that structural conditions (e.g., poverty and ethnic diversity) contribute little to post-election instability. Instead, the quality of elections and their results affect post-election politics in an interactive and non-linear fashion as predicted by the model.

Chapter 4: An Experimental Study of Fraudulent Elections and the Post-Election Protests. How can a winner of elections marred by fraud and voter intimidation convince the loser that he has large support in the society? Using an experimental setting, this paper studies how the information about election results and the competitiveness of the electoral process affect citizens' beliefs about the true popularity of the government and, subsequently, the success of a protest. We theoretically derive and evaluate the following hypotheses: (1) There will be no information update if elections are sufficiently manipulative and are won with great margins; (2) There will be positive updating in elections with medium levels of manipulation and high vote margin for the government; (3) There will be negative information updating if elections are highly manipulative but do not yield high margin for the government. We find relatively strong support for the first two hypotheses but none for the last one. The study also points to difficulties in studying rigged elections experimentally. The first difficulty has to do with the heterogeneity of the experimental population and the second one with the operationalization of electoral manipulation in a laboratory environment.