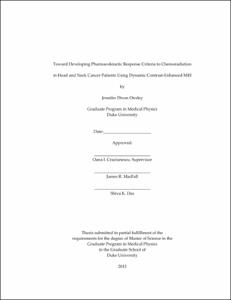 <bold>Purpose:</bold> The purpose of this study was to assess the feasibility of using dynamic contrast-enhanced MRI to monitor early treatment-induced changes in pharmacokinetic (PK) parameters in head and neck cancer patients. The intrinsic variability of three parameters (K<super>trans</super>, ve, and iAUC60) without treatment intervention was measured and compared to the treatment-induced variability.

<bold>Materials and Methods:</bold> Twenty patients were imaged while undergoing chemoradiation therapy (CRT) for head and neck malignancies. The imaging protocol included two baseline scans one week apart (B1, B2), and a third scan after 1-2 weeks of chemoradiation (ETX - early treatment). The images were acquired on a 1.5T scanner in the coronal plane with a temporal resolution of 10 sec. A population-averaged arterial input function was calculated from plasma concentration curves in both the left and the right carotids of each patient at each time point (B1, B2, ETX). The statistical significance of using a left/right AIF or a time-point-specific AIF was evaluated using Bland-Altman plots. To further ensure the correct calculation of PK parameters, the accuracy of the flip angles produced by the MR scanner was measured in phantoms and a volunteer. PK analysis was performed in iCAD (Nashua, NH) based on the modified Tofts model. This study focuses on two PK parameters used in the Tofts model (K<super>trans</super>, ve), and one semi-quantitative parameter that was also calculated in iCAD using an uptake integral approach (iAUC60). K<super>trans</super>, ve, and iAUC60 were averaged over regions of interest (ROIs), some of which covered primary tumors, and others of which covered known nodal metastases. Bland-Altman plots were used to describe the intrinsic variability in each parameter between the two baseline scans. The coefficient of repeatability (CR) between the baseline values was determined from the Bland-Altman plots and compared to the magnitude of the observed treatment-induced changes.

<bold>Conclusions:</bold> A population-averaged AIF for head and neck was generated that accounts for differences in right vs. left carotids, day-to-day AIF fluctuations, and treatment-induced AIF changes. It is not necessary to use a side-specific or a time-point-specific AIF. When K<super>trans</super> is greater than 1 min<super>-1</super>, PK parameter accuracy may be improved with the use of a time-point-specific AIF. Using the average AIF, large intrinsic fluctuations were observed in ROI-averaged values of K<super>trans</super>, ve, and iAUC60, making these parameters poor evaluators of early treatment response in head and neck cancer. Nodes were slightly more likely than primaries to show significant treatment-induced changes. Overall, the use of averaged MR-based PK parameters to assess early treatment response is limited and challenging. An analysis of voxel-based variability might be better suited to this task.