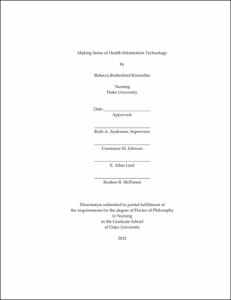 <bold>Background:<bold> Hospital adoption of health information technology (HIT) systems is promoted as essential to decreasing medical error and their associated 44,000 annual deaths and $17 billion in healthcare costs (Institute of Medicine, 2001; Kohn, Corrigan, & Donaldson, 1999). Leading national healthcare groups, such as the Institute of Medicine, Agency for Healthcare Research and Quality, Institute for Healthcare Improvement, and the Leap Frog Group continue to advocate for increased use of HIT (AHRQ, 2010; Beidler, 2010; Institute of Medicine, 2001; Page, 2003; The Leapfrog Group, 2009), such as provider order entry and electronic health record systems, as a way to improve healthcare quality in hospitals. Even under intense pressure to adopt HIT, however, a mere 2% of US hospitals report having a comprehensive electronic health record system. Further, more than 50% of US hospitals have only rudimentary HIT systems (Jha et al., 2009). With the ARRA HITECH Act of 2009, the pressure on hospitals to quickly adopt HIT and achieve meaningful use is mounting.

While a large body of literature exists about HIT implementation, the majority is anecdotal case reports. The remaining studies investigated attitudes about HIT or the impact of HIT on patient care processes and outcomes. Thus, best strategies for implementing HIT in hospitals remain unknown. Study design choices, such as the use of self report data, retrospective data collection methods, subjects from single care units or single healthcare professions further limit our understanding HIT implementation in complex hospital care settings.

<bold>Methods:<bold> This prospective, longitutdinal case study used a novel approach, sensemaking, to understanding how project teams may work to implement HIT in an academic medical center. Sensemaking, defined as the social process of establishing the meaning of events and experiences (Weick, 1995), is associated with learning and problemsolving in research studies of healthcare and nonhealthcare settings. Through direct observation and document review I observed project team social interaction and activities over the course of the 18 month preimplementation phase of an HIT implementation project in a single tertiary care hopsital.

<bold>Conclusions:<bold> In this study, I described team actions and activities that enhanced clinician team member sensemaking including: frequent, collective interaction with HIT and focusing team members' attention on specific aspects of HIT function. Further, study findings demonstrated that team members' perceptions of HIT and care processes varied across healthcare professions, management levels, and departments. Supportive social interaction from team leaders and members encouraged team member participation and resulted in members' voicing observations, perceptions and attitudes about the HIT and hospital care processes. Sensemaking of HIT teams not only resulted in identification of needed HIT design changes, but also revealed assumptions and information which may prove critical to successful HIT implementation in hospital care environments. Based on study findings, I suggested strategies for selecting and preparing HIT team members as well as for HIT team activities. This study advanced our understanding of how project teams function and bring about change in complex hospital care environments by not only identifying HIT implementation issues within but also describing the link between team member social interaction and implementation actions.