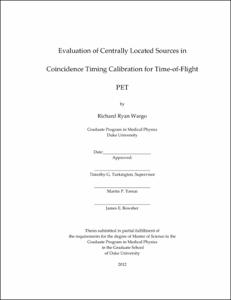 Coincidence Timing Calibration (CTC) is an essential part of ensuring proper PET scanner function. The purpose of CTC is to account for timing differences in detector modules. The importance and precision in which this calibration needs to work is even more stringent for Time-of-Flight (TOF) PET. In this work, we looked to investigate the CTC process by which the TOF capable GE PET/CT Discovery-690 (D690) operates. Currently, it uses a 68Ge rotating pin source (RPS) to perform the calibration. The purpose of this work was to investigate the use of a centrally located source to perform the calibration. The timing resolution of the D690 was determined and used as a metric to evaluate both methods.

Two cylindrical 18F filled phantoms of 7.5 and 10 cm diameter were used to perform the CTC. The RPS and system table motion had to be disabled in order to use the centrally located sources in the CTC. All CTCs started with the default calibration file in place. Iterations of the CTC were performed until convergence of the calibration was observed on the review screen. Even after convergence, more iterations were performed for further analysis. At the end of the CTC with the centrally located sources, a follow-up iteration with the RPS was performed to see what adjustments would be made. Next, the timing resolution of the system was measured using a 68Ge line source. An apparatus with known locations to support the source allowed for the evaluation of the timing resolution off the central axis. The importance of this was that it allowed for non-centrally located lines of response to be evaluated. Furthermore, the timing resolution was measured with specific calibration files enabled that corresponded to particular iterations. In addition, a novel way of measuring the timing resolution (propagated method) for a particular calibration result without an actual measurement with that calibration enabled was developed and implemented. This greatly reduced the number of resolution measurements needed, which was particularly helpful for evaluating the improvement for each iteration.

Conclusively, trends in the data showed that the centrally located sources did bring opposing detectors into good timing alignment with one another. These trends also indicated that the current CTC algorithm is not optimized for centrally located sources for the diameters tested. Finally, the method of propagating the change in calibration files illustrated a new CTC process method.