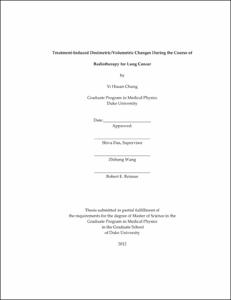 Purpose: The goal of this study is to investigate the necessity of adaptive radiation therapy (ART) for lung cancer patients treated with intensity modulated radiation therapy (IMRT) by quantifying the change in the tumor volume and its associate impacts on the target, lungs and esophagus.

Materials and Methods: Fifteen patients enrolled on an IRB-approved lung dose escalation phase I study were treated with IMRT (58-72 Gy, 2Gy/fraction), along with concurrent cisplatin and etoposide. Contrasted CT scans were acquired prior to RT and in the 2nd and 5th weeks of treatment. Tumor, lung and esophagus volumes were segmented on all CT datasets. The clinical target volumes were enlarged by 3 - 5 mm for planning target volume (PTV) expansions. The original plan (generated on pre-RT CT set) was recomputed on the subsequent CT sets and doses were accumulated by deformable registration to approximate the actual delivery. Five patients with the largest tumor shrinkage were selected and their original plans were re-optimized on the 2nd and 5th week CT sets. The plans on the 3 CT sets were summed to simulate ART. Comparisons were made between the original plan, approximated actual treatment and ART plan. Comparison metrics included QUANTEC dose parameters (lungs: V5, V20, and mean dose; esophagus: V35, V50, V70), equivalent uniform dose (EUD), maximum dose to the highest 1% of volume, and target volume covered by the prescription dose. Dosimetric and volumetric changes were tested for significance (Wilcoxon signed-rank test).

Conclusions: RT-induced esophageal volume displacement and increased lung dose-volume metrics during treatment are significant. Adaptive plan re-optimization may be warranted in cases with larger tumors, where sizeable changes are expected during radiotherapy.