Turkish Foreign Policy: Neo-Ottomanism 2.0 and the Future of Turkey's Relations with the West. 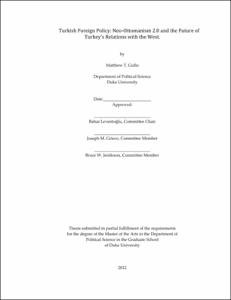 Turkish-Western relations have undergone a tremendous transformation over the last five years. This relationship has at times produced vast amounts of cooperation, while at other times, tension and non-cooperation has occurred. Recently, as Turkey has risen economically, politically, and militarily, there has been much concern that the "model of democracy" in the Middle East" is moving towards political Islam, which has created speculation that Turkey is leaving behind its "Western" allies to pursue a foreign policy of "neo-Ottomanism". To achieve an understanding for the conditions where cooperation <italic>should<italic> occur in Turkish-Western relations, this paper will first correct the term "neo-Ottomanism" in the literature on Turkish foreign policy by updating it with the "new" audience costs of "neo-Ottomanism" and upgrading it to "neo-Ottomanism 2.0". A decision-model will be created using a comparative historical analysis that designates the new audience costs associated with "neo-Ottomanism 2.0" by reimaging contemporary Turkish politics and constructing a theory around how audience costs at the domestic level of politics incurs costs on the current Turkish government that makes cooperation at times less likely given the intensity of an issue. By doing such, this paper will demonstrate when cooperation <italic>should<italic> occur between the West and Turkey and when the audience costs associated with "neo-Ottomanism 2.0" are not high enough that they will weaken the government's hold on power