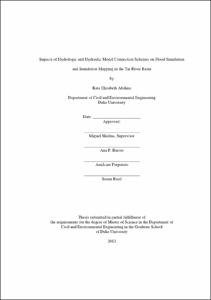 Flooding is the leading cause of losses from natural disasters in the United States, responsible for over 140 deaths a year (United States Geological Survey [USGS], 2006 and 2012). Dynamic inundation mapping, or using continuous modeling in conjunction with a GIS-system to create maps of flooded areas under different scenarios, has the possibility to better predict flooding by taking into account environmental conditions preceding and during the flood ( such as soil moisture, rainfall spatial heterogeneity and timing). This study examines the effect of hydrologic-hydraulic model linkage schemes in generating inundation maps and understanding the uncertainties involved, with an eye towards improving operational use.

The Hydrology Laboratory's Research Distributed Hydrologic Model (HL-RDHM) was used to generate inputs to the Army Corps of Engineers Hydrologic Engineering Center's River Analysis System (HEC-RAS) hydraulic model for two simulation time periods (September to December 1999 for the simulation of flooding due to Hurricane Floyd and from June to October 2006 for flooding due to Tropical Storm Alberto) in the Lower Tar River sub-basin for four different hydrologic-to-hydraulic model connection scenarios of increasing complexity and increasing number of inflow points. The HEC-GeoRAS, an extension built for use with ArcGIS to pre-process and post-process HEC-RAS geometric data, was used to generate inundation maps from the maximum water surface produced during each simulation time period.

The stage and flow simulated by the hydraulic model were compared to observed data recorded by USGS gauges and the goodness of simulation was assessed using the Nash-Sutcliffe Efficiency (NSE). The most detailed scenario slightly outperformed the less detailed scenarios for simulation of flow and stage at gauges on the main stem of the Tar River for the both simulation periods (NSE >0.89). No scenario did a good job of simulating the stage or flow on the tributaries of the Tar River (NSE <0.52). For the 1999 simulation, the flood elevation predicted by the inundation map was compared to high water marks collected by the Federal Emergency Management Agency (FEMA) and the USGS after Hurricane Floyd. All scenarios generally predicted flooding well, with mean error of around 1 foot for the less complex, more calibrated models, around 1-1.5 feet for the more complex models, and mean absolute error for all scenarios around 3.5-4 feet. The time required to generate these simulations and maps was not greatly increased with increasing modeling complexity, though the models did require careful set-up to ensure stability. The results of this work suggest modest benefits in accuracy of modeling stage and flow by increasing the number of inputs from a hydrologic model to a hydraulic model. Mapping results show limited statistical gain, but some importance of a multi-stem model in order to create inundation maps which include flooding effects on tributaries. Lack of observed data to provide boundary conditions, and reliance on input data with its own set of uncertainties seem to dominate uncertainty in tributary models unforced by observed data.