At the Threshold with Simone Weil: A Political Theory of Migration and Refuge 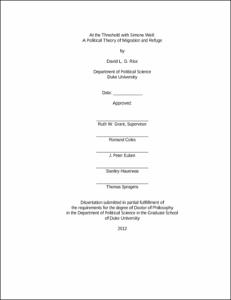 The persistent presence of refugees challenges political theorists to rethink our approaches to citizenship and national sovereignty. I look to philosopher Simone Weil (1909-1943), who brings to the Western tradition her insight as a refugee who attended to other refugees. Deploying the tropes of Threshold, Refuge, and Attention (which I garner and elaborate from her writings) I read Weil as an eminently political theorist whose practice of befriending political strangers maintains the urgent, interrogative insight of the refugee while tempering certain "temptations of exile." On my reading, Weil's body of theory travels physically and conceptually among plural, intersecting, and conflicting bodies politic, finding in each a source of limited, imperfect, and precious Refuge.

I then put Weil into conversation with several contemporary scholars - Michael Walzer, Martha Nussbaum, and Kwame Anthony Appiah - each of whom takes up a problematic between duties to existing political community and the call to engagements with political strangers. Bringing Weilian theory to bear on this conversation, I argue that polity depends deeply on those who heed the call to assume variously particular, vocational, and unenforceable duties across received borders.

Finally, by way of furthering Weil's incomplete experiments in Attention to the other, I look to "accompaniment" and related strategies adopted by human rights activists in recent decades in the Americas. These projects, I suggest, display many traits in common with Weil's political sensibility, but they also demonstrate possibilities beyond those imagined by Weil herself. As such, they provide practical guidance to those of us confronting political failures and refugee flows in the Western hemisphere today. I conclude that politico-humanitarian movements' own bodies of theory and practice point the way to sustained, cross-border, political relations.