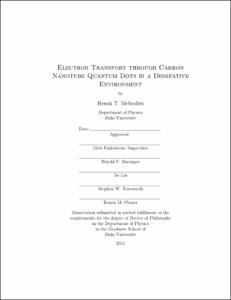 In sequential tunneling regime, we find the height of the single-electron conductance peaks increases as the temperature is lowered, although it scales more weakly than the conventional T<super>-1</super>. Moreover, the observed scaling signals a close connec- tion between fluctuations that influence tunneling phenomenon and macroscopic models of the electromagnetic environment.

In the resonant tunneling regime (temperature smaller than the intrinsic level width), we characterize the resonant conductance peak, with the expectation that the width and height of the resonant peak, both dependent on the tunneling rate, will be suppressed. The observed behavior crucially depends on the ratio of the coupling between the resonant level and the two contacts. In asymmetric barriers the peak width approaches saturation, while the peak height starts to decrease.

Overall, the peak height shows a non-monotonic temperature dependence. In sym- metric barriers case, the peak width shrinks and we find a regime where the unitary conductance limit is reached in the incoherent resonant tunneling. We interpret this behavior as a manifestation of a quantum phase transition.

Finally, our setup emulates tunneling in a Luttinger liquid (LL), an interacting one-dimensional electron system, that is distinct from the conventional Fermi liquids formed by electrons in two and three dimensions. Some of the most spectacular properties of LL are revealed in the process of electron tunneling: as a function of the applied bias or temperature the tunneling current demonstrates a non-trivial power-law suppression. Our setup allows us to address many prediction of resonant tunneling in a LL, which have not been experimentally tested yet.