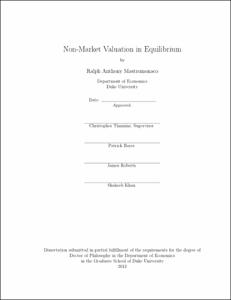 This dissertation investigates the non-market value of environmental quality in several contexts with attention paid to equilibrium effects. Chapter One contributes to the ongoing debate concerning the effect of various actions taken by the U.S. Environmental Protection Agency under CERCLA, commonly known as the Superfund Program, on housing prices. The study differs from national sample analyses and site-specific analyses by providing policy-relevant estimates of the hedonic price function in a particular region for the average site. Further, an estimate of the effect on housing prices is given for each of the major events that occur under a typical Superfund remediation. Using house and time-varying census tract fixed effects, I find a 7.3% increase in sales price for houses within 3 km of a site that moves through the complete Superfund program. The analysis gives evidence of positive price appreciation for housing markets and serves as a lower bound for measuring remediation benefits. Chapter Two proposes a new dynamic general equilibrium model of residential location choice with social spillovers and uses it to evaluate the equilibrium consequences of changes in pollution exposure. In particular, I investigate the hypothesis of ``minority move-in,'' which postulates that disproportionate exposure to pollution results from minorities and low-income households trading off such exposure for lower housing costs. Second, I address the question of whether economic incentives caused by differences in willingness to pay across socioeconomic status can explain why polluters disproportionately locate near disadvantaged populations in order to minimize expenses from collective action bargaining over the negative externality. Simulations indicate ``minority move-in'' likely does account for some of the imbalance in exposure to pollution across socioeconomic status. Further, general equilibrium estimates reveal that equilibrium sorting behavior widens the gap in willingness to pay for environmental quality between minority and white households, and between high and low-income households. The disparity in general equilibrium willingness to pay to avoid toxic emissions provides economic incentives for polluters to target disadvantaged populations. Chapter Three investigates how information contained in the U.S. Environmental Protection Agency's Toxic Release Inventory program affects prices in the housing market. First, I use a reduction in the reporting requirement threshold in 2001 as a quasi-experiment to determine whether prices change for existing firms who, as a result of the change, must report. Second, the existence of a reporting threshold creates a discontinuity in treatment than can be exploited. I estimate a regression discontinuity model that assumes that site unobservables are balanced in a neighborhood of the discontinuity. Using a difference-in-differences estimator for the first specification, I find that listing a site in the Toxic Release Inventory lowers prices by 3.1% within a three kilometer radius of the site, and that the effect is stronger at shorter distances. The regression discontinuity model produces qualitatively similar results that are smaller in magnitude but still significant. The results suggest that households to capitalize the information contained in the Toxic Release Inventory. However, since the treatment sites under consideration have virtually no emissions, these results do not contradict previous findings in the literature that toxic air emissions are unrelated to prices. Rather, they suggest that households might be concerned about the dangers of toxic chemicals that might result from an emergency or catastrophic accident.