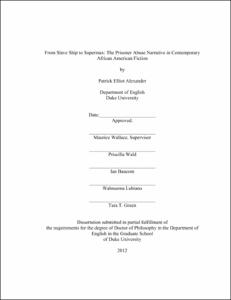 Responding to African American literary criticism's recent engagements with contemporary U.S. imprisonment, <italic>From Slave Ship to Supermax</italic> traces the development of a heretofore un-theorized tradition in African American literature in which fiction writers bring to light the voice, critical thinking, and literary production of actual prisoner abuse survivors. This dissertation treats novelists James Baldwin, Toni Morrison, Charles Johnson, and Ernest Gaines as the contemporary prison's literary intermediaries, as writers whose fictional narratives of jailhouse beatings, rape and wounding on slave ships, and state-sponsored execution are inspired and haunted by the critically-unexamined abuse stories of late-twentieth century prisoners. Drawing from the field of African American literary theory, political prisoners' writings, as well as prisoners' low-circulating zines, journals, and pamphlets, I argue that the production and distribution of abuse narratives by African American fiction's captive characters illuminate the clandestine and insurgent literary practices of actual abused prisoners. This revelatory work accomplished by Baldwin, Morrison, Johnson, and Gaines demonstrates the radical utility of African American fiction at a moment in which prisoner abuse is widespread, underrepresented, and rarely documented in a way that affords the abused prisoner any measure of authorial control. In contradistinction to the victimization narratives that typify mainstream prisoner abuse stories, stories which appear in the human rights literature of advocacy organizations like Human Rights Watch and Amnesty International, this dissertation concludes that contemporary African American novelists emphasize the authorial control of abused captives and thus make apparent the rich complexities of their interior lives and the way in which the repressive spaces to which

they are confined are also generative sites for reimagining the self and community.