Cytoskeletal Dynamics and the Temporal Control of Yeast Morphogenesis 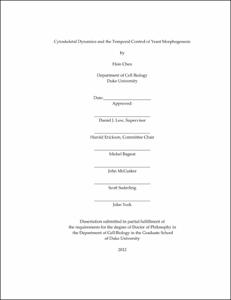 The cells of the budding yeast Saccharomyces cerevisiae undergo a robust morphological cycle, involving reorganization of the actin cytoskeleton, septin ring formation, and polarized growth. These events are crucial to the formation of a fully-equipped and properly-shaped bud, which gives rise to the daughter cell. The budding yeast, as a well-established genetic model system, has attracted numerous investigations aimed at uncovering the underlying principles of morphogenesis.

Despite the important roles of the septin ring and collar in morphogenesis and cytokinesis, little is known about how they are assembled. We found that septins are recruited to the ring and collar following a tri-linear assembly/disassembly scheme.

Polarization of actin cables enable directed secretion and growth. The formin Bni1p, an actin nucleator, is thought to polarize actin cables in response to the direct regulation by the master polarity regulator, Cdc42p. However, we found that all the known Bni1p-regulatory pathways are dispensable, including the direct regulation by Cdc42p, and we uncovered a novel pathway linking Bni1p to Cdc42p via the Cdc42p effector, Gic2p.

Yeast morphogenesis is tightly coupled with the cell cycle. Contrary to the prevailing model, we found that G1-CDK activity, albeit required for bud emergence, is not needed to trigger polarization. This finding suggests that cells are in a default polarized state, which is negatively regulated by the G2-CDK.