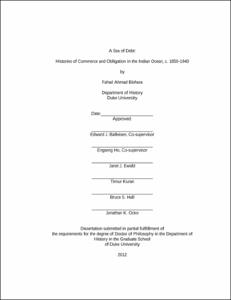 This dissertation is a legal history of debt and economic life in the Indian Ocean during the nineteenth and early-twentieth century. It draws on materials from Bahrain, Muscat, Bombay, Zanzibar and London to examine how members of an ocean-wide commercial society constructed relationships of economic mutualism with one another by mobilizing debt and credit. It further explores how they expressed their debt relationships through legal idioms, and how they mobilized commercial and legal instruments to adapt to the emergence of modern capitalism in the region.

At the same time, it looks at the concomitant development of an Indian Ocean-wide empire of law centered at Bombay, and explores how this Indian Ocean contractual culture encountered an Anglo-Indian legal regime that conceived of legal documents in a radically different way. By mobilizing written deeds in imaginative ways, and by strategically accessing British courts, Indian Ocean merchants were able to shape the contours of this growing legal regime.

Most broadly, the dissertation argues that law and courts became increasingly central to economic life in the Indian Ocean, and that economic actors in the region employed a wide range of different legal strategies in adapting to a changing world of commerce. In the Indian Ocean, as elsewhere, the histories of commerce and law were inextricably intertwined.