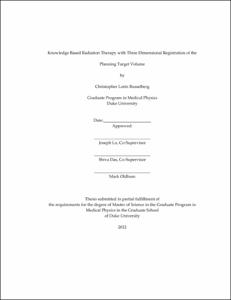 Knowledge based radiation therapy planning was developed as a way to use a knowledge base of clinically approved radiation therapy plans to shorten the amount of time necessary to create a new treatment plan. The method has been tested using plans from a database of approved plans from Duke University and it was shown that the quality of the new plan is at least comparable to the original plan. When a match is found from the database for a query anatomy, the fluences of the match plan are deformed to fit the query planning target volume (PTV) and brought into the new query plan. The deformation is currently done using several two dimensional deformation registrations of the beam's eye vies (BEV) projection of the match PTV to the BEV of the query PTV for each beam in the plan. We investigated whether using information from a three dimensional deformation of the PTVs to deform the fluences would yield higher quality plans than the two dimensional method. Using Velocity AI's three dimensional deformation capabilities we deformed several match query pairs and projected the deformation field down into two dimensions for each beam angle. Using the projected fields we deformed each beam's fluence and imported the new fluences into a radiation therapy plan. After evaluating the DVHs of both pre- and post-optimized plans we concluded that there is no benefit to performing the three dimensional deformation method over the two dimensional method for prostate patients.