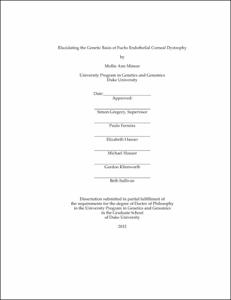 Fuchs endothelial corneal dystrophy (FECD) is a complex, late-onset disorder that is a frequent indication for corneal transplantation and affects women more frequently than men. Although linkage and association studies in patients of European and Asian ancestry have started to explain the genetic basis of this disorder, the mechanism by which FECD develops is still unclear. Three projects were undertaken to help elucidate the genetic basis of FECD. The first project examined a large, multigenerational family that exhibited strong familial clustering of FECD and identified evidence of linkage to chromosome 18. This locus that has also been implicated through work on large and small FECD families as well as unrelated patients. The second project examined African-Americans with FECD and is the first work to examine this population of patients with respect to the FECD phenotype. Novel variants in three FECD candidate genes, <italic>COL8A2</italic>, <italic>SLC4A11</italic>, and <italic>ZEB1</italic> were identified at approximately the same rate as observed in patients of other ancestries, reinforcing the notion that these genes only contribute to a small fraction of FECD genetic susceptibility. Finally, the influence of environmental factors on FECD susceptibility was examined through the use of a risk factor questionnaire given to cases and controls at the time of study enrollment. Several factors, including gender, age, and cataracts, were found to significantly affect FECD risk. Gender and the number of cataract surgeries were found to significantly interact with a genetic variant, rs613872 in the <italic>TCF4</italic> locus on chromosome 18 that has been consistently and reproducibly associated with FECD, to influence FECD susceptibility. Together, these findings indicate that the genetic basis of FECD is complex, and recent advances in the field show promise in accelerating the pace of discovery that will hopefully develop better FECD treatments in the near future.