What We Owe the Global Poor: In Defense of a Moderate Principle of Sacrifice 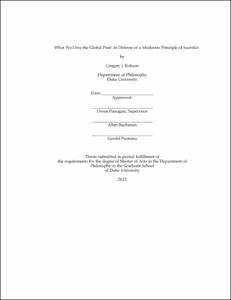 Peter Singer's 1971 essay "Famine, Affluence, and Morality" sparked a surge in interest among philosophers in the beneficent obligations of the global rich to assist the global poor. Richard Miller, a prominent recent critic of Singer, has argued that Singer's position is too demanding and proposed the Principle of Sympathy as an alternative to Singer's Principle of Sacrifice. I argue against Miller's view and highlight problematic features of his "daughter's aesthetic sense" example and his "closeness-to-heart" criterion. After critically examining Miller's and Singer's alternative accounts, I argue for a substantially revised version of Singer's position. The Moderate Principle of Sacrifice (MPS) that I propose includes four revisions to Singer's account. These revisions allow it more plausibly to capture our beneficent obligations to assist the global poor.