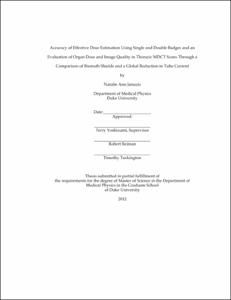 <bold>Methods and Materials:<bold> (Project 1): Radiation workers in interventional radiology and cardiac catheterization laboratory were provided with two monitors and asked to place one at the collar and the other underneath the lead apron. Two commercial radiation monitor vendors were used for the study; both vendors were accredited by the National Voluntary Laboratory Accreditation Program (NVLAP). Effective dose equivalent (EDE) was computed by single-badge and double-badge methods based on the NRC Publication 2002-06. Data were plotted EDE1 (single badge) vs. collar reading and EDE2 (double badge) vs. collar reading. Data on EDE2 vs. collar reading were fitted by linear regression and a new equation for the EDE2collar was derived for routine clinical EDE estimation.

(Project 2): The transmission properties of lead aprons and a thyroid shield were measured using a 6-cc ion chamber and electrometer. These measurements were taken on a GE VCT (64 slice) scanner at 80, 100, and 120 kVp. The different types of lead aprons studied included lead free, lightweight lead, and fully leaded.

(Project 3): The accuracy of film badges was evaluated by comparing the reported deep dose equivalent of the film badge readings to the ion chamber readings measured during the same exposure. The measurements were made on a Philips Standard Radiography unit (Duke North, Room H1) at 80, 100, and 120 kVp. Two badges were exposed with the ion chamber per energy.

(Project 4): An adult male anthropomorphic phantom was loaded with 20 diagnostic MOSFET detectors and scanned without lead aprons using a whole body computed tomography (CT) protocol. All measurements were taken on a GE VCT (64 slice) scanner at 80, 100, 120 kVp. Two commercial film badges were placed on the phantom at the collar location and waist location. Individual organ doses in the phantom were corrected for lead apron attenuation factor and ED was computed using ICRP 103 tissue weighting factors. The single badge conversion coefficient (CC) was determined for each energy by taking the ratio of the ED to collar badge reading. The reported deep dose equivalent for the collar badge was plotted against the MOSFET effective dose and a new equation for EDcollar was derived.

(Project 5): Organ dose was measured with MOSFETs using an adult female anthropomorphic phantom; the phantom was scanned with pulmonary embolus protocol. All measurements were performed with a 64-slice scanner at 120 kVp. The reference exposure and reduced exposure (with 4-ply Bi shield) was measured with an ion chamber located at the level of the breast. The tube current was reduced by normalizing the reference tube current to the ratio of the reduced exposure to the reference exposure. Image quality was measured using a high contrast insert placed in the lung. Regions of interest (ROIs) were drawn in the breast, lung, and heart to measure HU change and noise. ROIs were drawn in the lung and high contrast insert to measure signal-to-noise ratio (SNR) and percent contrast (%Contrast).

<bold>Conclusions:<bold> (Project 1): A new EDE estimation method has been developed based on the results of two-badge system. The method would enable us to compute new EDE values knowing only the collar badge reading. Since EDE2 reads a factor of six less than EDE1, this provides a realistic advantage in regulatory compliance for interventional and cardiac catheterization personnel. Further, new EDE conversion coefficients should be developed for better assessment of EDE.

(Project 2): The fully leaded shielding materials had the lowest percent transmission. It should be noted that radiation workers are generally exposed to only scattered radiation of lower energy. Although this study did not measure attenuation properties at lower energies, it is expected that the percentage of attenuation will only increase with lower energies.

(Project 3): The reported deep dose equivalent (DDE) underestimated the dose to soft tissue compared to the calibrated ion chamber readings. This may be due to the fact that DDE is the dose equivalent at a depth of 10 mm.

(Project 4): Current regulatory ED conversion coefficient (CC) with single collar badge is 0.3; for double-badge system, they are 0.04 and 1.5 for the collar and under the apron respectively. Based on our findings we recommend the current collar CC be dropped due to the overestimation of ED. Since occupational workers are exposed mainly to scattered x-rays of lower energy, a collar CC of 0.01 (80 kVp data) may be a more viable option. The double badge system seems to provide a better coefficient for the collar as 0.04; however, exposure readings under the apron are usually negligible to zero with lead aprons.

(Project 5): For thoracic CT using RTC will result in similar global reduction in organ dose; the use of Bismuth with TCM will lead to an overall decrease in organ dose and more marked dose reduction for the breast. There was a significant difference in SNR (p = 0.0003) and %Contrast (p < 0.0001) in the TCM with Bismuth scan compared to the reference scan (TCM). The RTC scan also demonstrated a significant decrease in SNR and %Contrast with p < 0.0001 for both. While the TCM scan demonstrated superior image quality, the trade-off is in the increased dose to the breast.