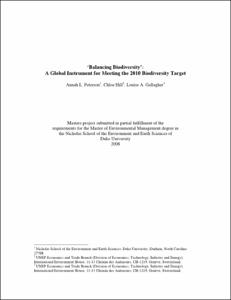 View / Download
325.2 Kb
Date
Authors
Peterson, Annah
Hill, Chloe
Gallagher, Louise
Advisor
Vincent, Jeff
Repository Usage Stats
372
views
559
downloads
Abstract
Radically heightened extinction rates over the past 50 years have prompted the Convention on Biological Diversity to adopt the ‘2010 biodiversity target,’ which aims to significantly reduce global biodiversity loss by 2010. Despite the establishment of this ambitious goal, few policies have proven to be able to ensure its achievement. This paper explores the potential for biodiversity conservation policies to be developed on a global scale, with special emphasis on incentive-based instruments to curb biodiversity loss. By far, the primary cause of biodiversity loss is habitat destruction resulting from land-use change. Land-use change, however, occurs over a variety of spatial scales, making it difficult to utilise incentives in order to target the major actors engaging in land-use change activities. Specifically, land-use change is driven globally by international developers selling products for export, as well as locally by actors altering land to meet subsistence needs. In light of these two groups, the paper discusses the need for a two-pronged incentive system, which creates incentives for both international actors engaging in high-return development activities, particularly those from the private sector, and local actors engaging in lower-return subsistence activities. It then examines the potential for creating this two-prong incentive structure through the development of a global system of biodiversity offsets, referred to as ‘balancing biodiversity’. The paper concludes by establishing rudimentary guidelines for the implementation of such a system with the hope of initiating discussion over global instruments for meeting the 2010 target.
Type
Master's project
Department
Nicholas School of the Environment and Earth Sciences
Subject
Biodiversity Conservation
Economic Incentives
Biodiversity Offsets
Convention on Biological Diversity
Permalink
https://hdl.handle.net/10161/551
Citation
Peterson, Annah; Hill, Chloe; & Gallagher, Louise (2008). 'Balancing Biodiversity': A Global Instrument for Meeting the 2010 Biodiversity Target. Master's project, Duke University. Retrieved from https://hdl.handle.net/10161/551.
Collections
More Info
Show full item record