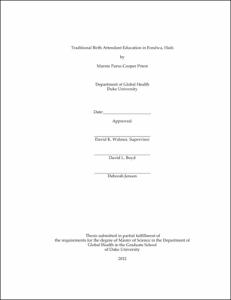 Objective: Approximately 85% of rural Haitian births happen at home, attended by family members or traditional birth attendants (TBAs). Our primary research question is: Are the TBAs in this study willing and/able to learn and retain the material in the education program, and integrate this material into their practice? Secondarily, we are interested in obtaining information toward answering the following two questions: 1. Are these TBAs interested in going on to become skilled birth attendants or working in conjunction with healthcare service providers at a future Fondwa health center, even if they do not become skilled birth attendants? 2. Does the education model that is utilized in this research allow us to measure short and long term changes in the TBA's abilities, as demonstrated by TBA feedback, test scores and observations of TBAs at deliveries?

Methods: This study implemented and assessed a pilot four-week TBA education program. Each TBA took a pre-test before beginning the program and a post-test after completing the program, as well as post-tests at six weeks and six months. Results for learning and retention between the four tests were analyzed in STATA using a Paired t-test. Effects of age, training method, literacy, numeracy and sex on learning and retention were analyzed in STATA using One-way ANOVA. The study also used group interviews and surveys with TBAs and community members to examine birth practices and to begin compiling baseline data for evaluation of the impact of the program. Associations between variables on the community surveys were analyzed using Chi-squared and Fisher's exact tests.

Results: Out of a total of 493 questions asked on the four tests (29 questions on each of 17 tests), 12.4% were answered correctly on the pretest, 65.1% on the first post test, 58.6% on the 6-week test, and 59.4% on the 6-month post-test. Analysis showed statistical significance for the learning increase between the pretest and the initial post-test (p = 0.0000) and for retention between the initial post-test and the 6-week post-test (p = 0.0086), but statistical insignificance between the 6-week post-test and the 6-month post-test (p = 0.6864). The influences of age, training method, literacy, numeracy and sex on learning and retention were not statistically significant. The influence of these variables on total (all four combined) test scores was significant for number literacy only (p=0.0214). The program design received unanimously positive feedback from the TBAs. The TBAs are interested in becoming skilled birth attendants (SBAs) or collaborating with SBAs.

Conclusion: The TBAs were willing and able to learn and retain the material in the education program, as demonstrated in a classroom setting. However, the critical question of how well they integrate this into their practice remains unanswered. The education model allows us to measure changes in abilities as measured by test scores, but the model does not successfully measure abilities as measured by observations at deliveries. We attended births (one) by invitation only. The education program would benefit from a preceptor component.