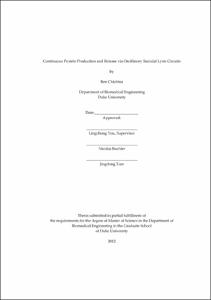 Advancements in the biotechnology and pharmaceutical fields have led to the development of an expanding number of applications for certain recombinant proteins of interest. As such, the demand for efficient and cost effective protein production systems is growing. A great deal of research, cost and time goes into improving and optimizing the production of commercially valuable proteins of interest. Many current methods involve growing a culture of cells to its maximum capacity, all of which are producing a certain protein of interest, and then killing off the entire culture to extract the protein. By doing so, regrowth of the entire cell population is required, taking additional time and resources. Controlled lysis could allow for a more continuous protein release through the killing of only a portion of the population and allowing recovery in the exponential growth phase. This study acts as a proof of concept for the implementation of programmable suicidal lysis circuits into bacteria, Escherichia coli, being cultured for protein production for the sustained production and release of said proteins.

To test the viability of suicidal lysis as a mechanism for sustained protein release a robust oscillator circuit, ePop, was used. The ePop circuit controls the synthesis of E gene, producing a protein that incites cellular lysis by attacking the cell wall. By culturing cells for long term growth and extracting small volumes of the culture at various time points for protein quantification, the protein release capabilities of ePop were observed. Protein quantities in the lysates and supernatants of the extractions were determined using SDS-PAGE Coomassi Staining and a Pierce BCA Protein Assay. Also, western blotting was performed on supernatant samples to show the effective release of a specific protein of interest, GFP. The focus was on the presence of protein in the supernatant which is correlated to the release during the lysis cycle of the bacterial population oscillations.

Protein release via the ePop circuit was shown to be effective and robust. The oscillator circuit released measurable quantities of protein in the supernatant of the culture extractions as predicted. The green fluorescent protein of interest used as a pilot protein was effectively released into the supernatant and shown through a western blot with a GFP specific antibody. Population oscillator circuits through cellular lysis were shown to be a viable method for protein release and could be applied to protein production processes as well as other technologies.