Biomechanics of Vertical Clinging and Grasping in Primates 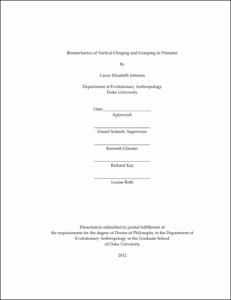 Primates and many other animals that move in an arboreal environment often cling, sometimes for long periods, on vertical supports. Primates, however, face a special challenge in that almost all primates bear nails on the tips of their digits rather than claws. Squirrels and other arboreal animals possess claws and/or adhesive pads on their digits in order to hold their weight on vertical substrates. Assuming the ancestral primate was arboreal and lost claws prior to the radiation of primates this paradox has important implications and raises a significant question about living primates and early primate evolution: how can primates maintain vertical postures without claws and how did early primates meet this challenge? Primate vertically clinging and grasping postures (VCG) have been studied in the wild and theoretical models of VCG postures have been described. This dissertation builds on this work, by studying the biomechanics of VCG postures in primates. Based on mechanical models, it was hypothesized VCG posture in primates will vary in three ways.

Hypothesis 2: As substrate size increases, primates will place their arms to the side of the support and adjust posture and muscle recruitment in order to maintain a necessary tangential to normal force ratio to resist gravity.

Hypothesis 3: On substrates of the same relative size, larger animals should be less effective at maintaining VCG postures due to scaling relationships between muscle strength and body mass.

The sample consisted of multiple individuals from eight strepsirrhine species at the Duke Lemur Center. The sample varied in locomotor mode--habitual vertical clinging and leaping (VCL) compared to less specialized arboreal quadrupeds--and body mass--100 to 4,000 grams. Subjects were videorecorded while holding VCG postures on substrates of increasing size. Substrate preference data were calculated based on frequency and duration of VCG postures on each substrate. Qualitative kinematic data were recorded for a maximum of thirty trials per individual, per substrate. Angular data were calculated for forelimbs and hindlimbs from these videos for ten trials per individual per substrate. In addition, kinetic data from an imbedded force transducer were collected for two species that vary in locomotor mode, but not body mass.

There are several significant and relevant results from this study that address both primate functional anatomy and locomotor evolution. Hypothesis one was supported by hand and hindlimb joint postures, shown to be highly sensitive to locomotor mode. VCL primates exhibited deeply flexed limbs and more hand grasping (wrapping around the substrate) versus parallel hand postures and use of bowed finger postures compared to less specialized primates. Kinetically, species were shown to bear the majority of their weight in their hindlimbs relative to their forelimbs. The forelimb joints and foot showed little variation by habitual locomotor mode. Hypothesis two found support in that species tend to prefer smaller substrates, clinging less frequently for shorter durations as substrate size increases. Hand posture changed as size increased, as primates (except for the slow lorises) in this study grasped with their pollex on smaller substrates, but the pollex disengaged in grasping on larger substrates. Hypothesis three was not supported; body mass did not influence VCG postures.

Taken together, the finding that the forelimb held a wide range of postures on each substrate size for all species and played a limited role in weight-bearing suggests the forelimb free to move (to adjust posture and or forage). The hindlimb plays a more specific role in weight-bearing and is more sensitive to variations in primate anatomy. Additionally, these findings lead to hypotheses concerning the relatively short pollexes of primates, and that the ancestral primate was smaller than 100g and preferred small substrates as found in a fine-branch niche.