The Effects of Habitat Parameters on the Behavior, Ecology, and Conservation of the Udzungwa Red Colobus Monkey (Procolobus gordonorum) 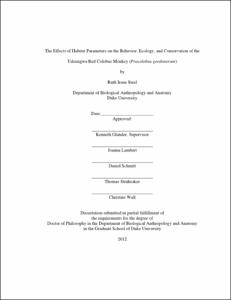 A central theme in animal ecology is the study of the relationship between ecology and behavior. This dissertation demonstrates how ecological parameters, particularly food and weather variables, correlate with ranging, activity budget, and diet in Udzungwa red colobus monkeys (URC, <italic>Procolobus gordonorum</italic>), endemic to the Udzungwa Mountains, Tanzania.

From April 2009 - March 2010, four URC groups were habituated and studied in Mwanihana and Magombera Forests. During all-day follows, ranging, activity budget, and diet data were collected using GPS units and ten-minute scan samples of sustained activities. Food characteristics were assessed using transect and phenology surveys. Preliminary nutritional analyses were conducted on species-specific parts fed upon during October. I designed and employed novel methods for estimating ranging statistics which were compared with conventional methods.

Mean daily travel distance (DTD) was 970 m, longer than in other red colobus taxa. DTD was shorter in October and November when temperatures were warmer and a high abundance of young growth became available. Young growth comprised the majority of all groups' diets in each sample period. When young growth abundances were highest, Magombera groups traveled shorter distances. One group's DTD did not differ seasonally and was significantly longer compared to other groups. This group may have traveled longer distances and spent less time resting in order to consume young growth in a habitat with lower young growth abundances. A correlation between time spent resting and temperature suggests behavioral prevention of hyperthermia. URC energetic strategies may involve balancing thermoregulation with maximizing energy intake. Conservation recommendations are discussed and include stricter forest protection.