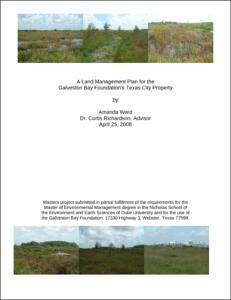 View / Download
7.0 Mb
Date
Author
Ward, Amanda
Advisor
Richardson, Curtis J
Repository Usage Stats
256
views
434
downloads
Abstract
As a land trust, the Galveston Bay Foundation holds conservation easements and also owns several thousand acres of coastal land in the four county region surrounding the Galveston Bay in Texas. The foundation accepted a conservation easement as well as full ownership of this 132.2 acre (53.5HA) wetland mitigation property in 2005. This management plan will serve to educate staff and board members on the history of this property and potential issues of interest for the management of this land. The property has a coastal prairie upland with 42.6 acres (17.24 HA) of created wetlands. The wetlands were created as required by a United States Army Corps of Engineers permit for a project that destroyed wetlands on another site. Over the past three years the site has become re-vegetated with an assortment of wetland plant species and the created wetlands maintain natural water conditions as planned. The property was placed under a conservation easement to ensure that it would be preserved in as natural a condition as possible forever; however, as the foundation owns the land and was the recipient of the conservation easement it appears that the easement may not be valid. Therefore, either a new easement should be signed with another land trust, or the land should be sold to a conservation buyer with the Galveston Bay Foundation holding the easement. Chinese Tallow (Sapium sebiferum), a prevalent invasive species in the region, will need to be managed and other invasive species invasions should be prevented. There are public use structures on the western tract of the property which imply that the public may visit the site which will require clear public use policies. Fencing may be considered on the eastern portion of the property to prevent trespassing and additional signage should be placed to advertise GBF’s ownership of the land.
Type
Master's project
Department
Nicholas School of the Environment and Earth Sciences
Subject
Galveston Bay Foundation
land management plan
wetland mitigation
Permalink
https://hdl.handle.net/10161/552
Citation
Ward, Amanda (2008). A Land Management Plan for the Galveston Bay Foundation's Texas City Property. Master's project, Duke University. Retrieved from https://hdl.handle.net/10161/552.
Collections
More Info
Show full item record