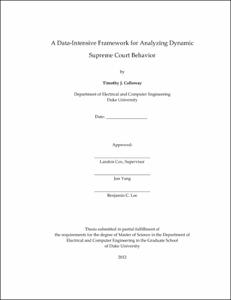 Many law professors and scholars think of the Supreme Court as a black box--issues and arguments go in to the Court, and decisions come out. The almost mystical nature that these researchers impute to the Court seems to be a function of the lack of hard data and statistics about the Court's decisions. Without a robust dataset from which to draw proper conclusions, legal scholars are often left only with intuition and conjecture.

Explaining the inner workings of one of the most important institutions in the United States using such a subjective approach is obviously flawed. And, indeed, data is available that can provide researchers with a better understanding of the Court's actions, but scholars have been slow in adopting a methodology based on data and statistical analysis. The sheer quantity of available data is overwhelming and might provide one reason why such an analysis has not yet been undertaken.

Relevant data for these studies is available from a variety of sources, but two in particular are of note. First, legal database provider LexisNexis provides a huge amount of information about how the Court's opinions are treated by subsequent opinions; thus, if the Court later overrules one of its earlier opinions, that information is captured by LexisNexis. Second, researchers at Washington University in St. Louis have compiled a database that provides detailed information about each Supreme Court decision. Combining these two sources into a coherent database will provide a treasure trove of results for future researchers to study, use, and build upon.

This thesis will explore a first-of-its-kind attempt to parse these massive datasets to provide a powerful tool for future researchers. It will also provide a window to help the average citizen understand Supreme Court behavior more clearly. By utilizing traditional data extraction and dataset analysis methods, many informative conclusions can be reached to help explain why the Court acts the way it does. For example, the results show that decisions decided by a narrow margin (i.e., by a 5 to 4 vote) are almost 4x more likely to be overruled than unanimous decisions by the Court. Many more results like these can be synthesized from the dataset and will be presented in this thesis. Possibly of higher importance, this thesis presents a framework to predict the outcomes of future and pending Supreme Court cases using statistical analysis of the data gleaned from the dataset.

In the end, this thesis strives to provide input data as well as results data for future researchers to use in studying Supreme Court behavior. It also provides a framework that researchers can use to analyze the input data to create even more results data.