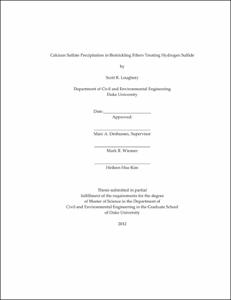 Hydrogen sulfide (H2S) is a toxic gas and common odor nuisance produced in a variety of chemical and environmental processes. The biological oxidation of H2S to sulfate/sulfuric acid is a well-documented treatment method that is efficient both in removal and cost. Sulfate ions produced in a BTF can interact with various cations, specifically calcium, and form insoluble salts. Gypsum (CaSO4*2H2O) formed within a BTF treating H2S can affect system performance by causing pressure buildup and reducing pollutant mass transfer. An experimental approach was developed to quantify gypsum precipitation in BTFs as a function of critical system parameters. Effluent liquid from one laboratory and four industrial BTFs was used to induce gypsum precipitation at various levels of pH, total sulfate concentration, calcium content, and ionic strength. A computer model was developed to predict gypsum precipitation based on the ionic composition of the reactor trickling liquid. The results support the hypothesis that gypsum precipitation in a BTF treating H2S is a realistic concern for industrial systems. The computer model demonstrates the ability to successfully predict gypsum precipitation within a correction factor of 2. The presence of gypsum and elemental sulfur in solid samples collected from industrial BTFs illustrates the feasibility of mineral deposition in full-scale treatment systems. Ethylene diamine tetraacetic acid (EDTA) shows the potential of being an effective additive for the prevention of gypsum formation within a BTF treating hydrogen sulfide.