Examining the Psychosocial Context of Mental Health: Bhutanese Refugees and Their Story of Resettlement. 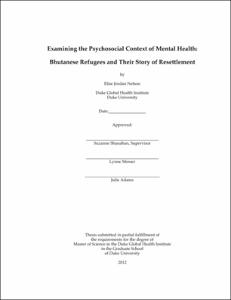 Over 100,000 Bhutanese refugees are in the process of being resettled from southeastern Nepal to eight different Western countries--the majority of whom are resettling to the United States. Refugees are universally at higher risk of mental illness, due to the large number of stressors to which they are exposed. Preliminary studies have suggested that resettled Bhutanese refugees may have particularly poor mental health outcomes, including high rates of suicide. This study conducted 23 in-depth life story interviews with Bhutanese refugees in Nepal, in attempt to explore the psychosocial context of mental illness among this population, and to understand the risk factors that they are, or will be, exposed to during their resettlement transition. Throughout the interviews the theme of "expectations of resettlement" emerged and revealed potentially large discontinuities between expectations of resettled life and the likely realities. Interestingly, these expectations were closely tied to many of the themes that emerged when discussing sources of mental illness within their population--suggesting that the failure of the expectations might greatly affect mental health outcomes. The results of this study are only preliminary and suggestive, but they add to the currently limited literature on Bhutanese refugee mental health. Additionally, they offer a detailed insight into the risks and needs of the Bhutanese as we prepare to incorporate them into our communities.