Health and Credit in Sub-Saharan Africa 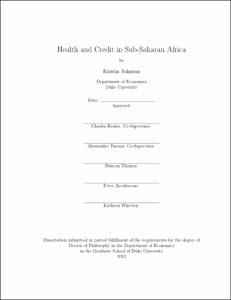 This dissertation explores two important development policies, the introduction of microcredit, and access to free anti-retroviral medications, including the causal impact of providing access through a randomized control trial, and exploring expectations of policy outcomes through a new and innovative survey design. The first chapter conducts an impact evaluation of the introduction of microcredit in rural Ethiopia. Despite the prominence of micro-finance in development policy, only few rigorous impact evaluations have been conducted to date, a large majority in Asia. We describe the results of two parallel large-scale randomized controlled trials completed between 2003 and 2006 in rural Amhara and Oromiya (Ethiopia). We first document that borrowing increased substantially in communities where the programs started their operations. However, we find only mixed evidence of improvements in economic activities, including agriculture, animal husbandry and non-farm self-employment. We find instead that the introduction of micro-credit was overall associated with significant improvements in school attendance among 10-16 years old boys and (in Amhara only) among children of age 6-9 of either gender. Implications of the imperfect compliance with the experimental protocol are also discussed.

The second chapter explores the evidence that suggests that even in a setting where medications are free, HIV positive patients do not always follow doctors' recommendations to take anti-retroviral therapy (ART). In Tanzania, a country disproportionately affected by the HIV/AIDS epidemic, 20% of HIV-positive persons in our study sample do not fully adhere to their medication regimen. Individuals who take ART face a tradeoff between decreasing risk of death due to HIV and increasing risk of adverse side effects. The decision of whether or not to start and continue ART depends on the patient's subjective expectations about the realization of health outcomes under different levels of adherence.

This paper combines new and innovative data on probabilistic expectations and elicited discount rates with self-reported measures of adherence to analyze individual beliefs about the effectiveness of available medication, and more specifically, how these beliefs influence individuals' decisions to adhere to a medication regime. Medical literature suggests that in order for ART to be effective, 95% of doses must be taken on time, and we find that patients are aware of this threshold. They report a dramatic increase in the probability of mortality between fully adhering and taking less than 95% of doses.

Comparing elicited expectations with realized outcomes, we find that predictions of health outcomes were significantly different than realized outcomes in the following period. Respondents learned that perfectly adhering did not make them feel as good as they thought it would, and conversely, that imperfectly adhering did not make them feel as badly as they thought it would. In addition, respondents who were not on ART significantly overestimated being in worse health. As such, we would expect that individuals' expectations would adjust over time to match more closely with realized outcomes. Examining how expectations change over time, we find that individuals update their expectations consistent with a Bayesian updating framework in which current expectations are determined by prior beliefs and new information.

Significant predictors of expectations include, overall health, completion of primary school, past choices, and patience as it related to health. Patience is measured by questions in the new survey allowing the estimation of a person-specific discount factor. This elicited discount factor (higher indicates more patience) does not vary significantly by gender, but HIV-positive respondents are significantly less patient than HIV-negative respondents.

Finally, incorporating elicited expectations we find that perceived effectiveness is an important predictor of taking ART, specifically respondents are less likely to take ART if they believe that taking it will worsen their health or increase their chances of mortality. Perceptions of the medications' effectiveness at reducing viral loads are significant predictors of perfect adherence and there is also evidence that adherence decisions are consistent with respondents' desire to avoid feeling nauseous, but that feeling fatigued may be associated with the effectiveness of ART.

Overall, this paper provides an analysis of individual subjective expectations data in an HIV/AIDS context and provides evidence that while individual subjective expectations do not accurately predict future health outcomes, they significantly influence adherence decisions. It is not sufficient to only use observable characteristics of HIV patients when analyzing adherence, as their expectations of the future comprise a large component of their decision to fully adhere to their medication regimen.