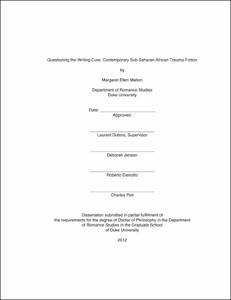 This dissertation examines a series of novels by Aminata Zaaria, Ken Bugul, Gaston-Paul Effa, Boubacar Boris Diop and Yolande Mukagasana. At the heart of my study is a problem that haunts much literary production and literary criticism about post-colonial Francophone African writing: the layers of distance and misunderstanding that often exist between readers and writers. Several of the authors in this study express frustration at the limited expectations that readers have of them, complaining that readers outside of the continent continue to read their novels solely in order to gain a grasp of socio-political "realities" of Africa. I propose a return to a select group of author's largely semi-autobiographical texts in order to better understand each writer's individual literary projects within the interdisciplinary framework of trauma studies. Interviews that I conducted with Senegalese and Cameroonian publishing directors, psychologists, sociologists and authors themselves offer an analysis of these texts within the context of broader social debates.

My first chapter focuses on Zaaria's La Nuit est tombée sur Dakar (2004) and Bugul's Le Baobab Fou (1983) and Cendres et Braises (1995) in order to examine intergenerational Senegalese semi-autobiographical representations of prostitution. My study ultimately finds that neither Senegalese society nor Zaaria and Bugul's narratives evidence healing through writing. Rather, both present literature as a "default" chosen because the authors found no one with whom they could initially share their stories face-to-face. Chapter Two hones in on Bugul's relationship with her mother, a painful theme revisited from one end of Bugul's semi-autobiographical oeuvre (Le Baobab Fou, 1982) to the other (De l'autre côté du regard, 2002). Chapter Three examines the trauma of parental loss in Gaston-Paul Effa's semi-autobiographical works, from Tout ce bleu (1996) to a more recent novel (Nous, les enfants de la tradition, 2008) in order to examine the evolution of Effa's personal identity quest and his extensive self-analysis over time in light of the author's permanent exile in France. My fourth chapter begins with a study of genocide survivor Yolande Mukagasana's recent narrative entitled N'aie pas peur de savoir (1999) in order to examine author/reader relationships in light of the often inconceivable trauma of genocide. I then move on to consider the ethics of speaking "for" genocide survivors by analyzing the well-known Senegalese author Boubacar Boris Diop's Murambi, le livre des ossements (2000) and the related Fest'Africa project. I end Chapter Four with a critique of Etoke's Melancholia africana: l'indéspensable dépassement de la condition noire (2010) in order to question whether or not sweeping theories of the various traumas experienced by members of Africa and its diaspora are in fact helpful in every context. Finally, I end my study with Effa's Voici le dernier jour du monde, which exhibits the interplay between autobiography, biography, fiction and the issue of literary violence.

I ultimately argue that a major difference between the "talking cure" of psychoanalysis and the process of seeking healing through literary narratives involves the question of audience. In the case of Sub-Saharan African literature, the author/reader relationship does not necessarily provide a safe space akin to the doctor/patient model in Freud's "talking cure." Therefore, I ultimately call for a closer analysis of the myriad ways by which authors are seeking healing and answers outside the realm of literature.