The Miraculous Life: Scenes from the Charismatic Encounter in Northern Ghana 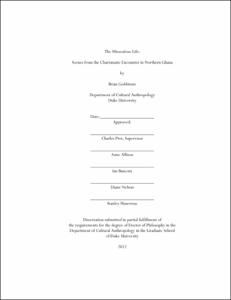 This dissertation examines the recent influx of Pentecostal-charismatic churches into the Northern Region of Ghana, a rural, underdeveloped region whose predominantly Muslim population has increasingly become the target of evangelistic efforts undertaken by Christians from the south. Based on ethnographic and archival research, my study considers the locus of this incursion as a densely layered zone of anxieties and emergences, desires and contestations, in which the elaboration of novel horizons of sensibility and experience is refracted through the vicissitudes of the region's social, economic, religious, and political history. I argue that the churches' impassioned campaign to "take back the north for the Lord" - a campaign whose exemplary medium is the evangelistic crusade in which "signs and wonders" are mobilized as particularly potent technologies of conversion - demarcates a complex field of intervention animated by a plurality of forces irreducible to those of strictly religious provenance. An ethos of progress and success fostered by the country's development apparatus; the longstanding prejudices surrounding northerners and "the north" in the Ghanaian national imaginary; the specter of a Muslim threat that surfaces in a post-9/11 world and perpetuates amidst a global war on terror - these are among the contingencies that have come together to render this encounter possible. Yet, far from simply overlaying these historical-political logics with the veneer of Christian discourse, my work charts the dissemination of a faith whereby, through the indwelling of the Holy Spirit, converts are anointed with a power to conceive themselves and, by extension, the world as nothing less than a totally "new creation." I contend that such practices of salvation, so characteristic of Pentecostalism's proliferation across the continent as a whole, are being recast in ways both subtle and sensational by their transposition into the allegedly pathological space of northern Ghana - as are, I suggest, the lives of the men and women who inhabit it.