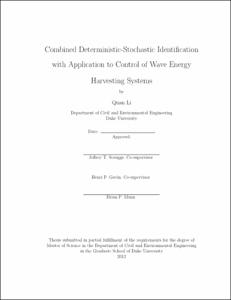 This thesis proposes an integrated procedure for identifying the nominal models of the deterministic part and the stochastic part of a system, as well as their model error bounds in different uncertainty structures (e.g. $\mathcal{H}_2$-norm and $\mathcal{H}_{\infty}$-norm) based on the measurement data. In particular, the deterministic part of a system is firstly identified by closed-loop instrumental variable method in which a known external signal sequence uncorrelated with the system noises is injected in the control input for the identifiability of the system in closed loop. By exploiting the second-order statistics of the noise-driven output components, the stochastic part of a system is identified by the improved subspace approach in which a new and straightforward linear-matrix-inequality-based optimization is proposed to obtain a valid model even under insufficient measurement data.

To derive an explicit model error bound on the identification model, we investigate a complete asymptotic analysis for identification of the stochastic part of the system. We first derive the asymptotically normal distributions of the empirical sample covariance and block-Hankel matrix of the outputs. Thanks to these asymptotic distributions and the perturbation analysis of singular value decomposition and discrete algebraic Riccati equation, several central limit theorems for the identified controllability matrix, observability matrix, and the state-space matrices in the associated covariance model are derived, as well as the norm bounds of Kalman gain and the innovations covariance matrix in the innovations model. By combining these asymptotic results, the explicit $\mathcal{H}_2$-norm and $\mathcal{H}_{\infty}$-norm bounds of the model error are identified with a given confidence level.

Practical applicability of the proposed combined deterministic-stochastic identification procedure is illustrated by the application to indirect adaptive control of a multi-generator wave energy harvesting system.