Modification of pH and pressure in a microfluidic cell culture device. 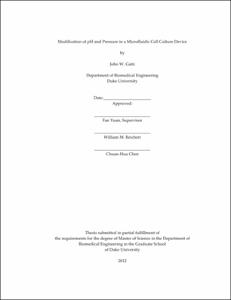 A three-dimensional tissue culture device previously described by Elliott et al. 1 is tested for its capacity to mimic cancer interstitial fluid pressure and interstitial pH. The device described by Elliott et al. is a three-channel system; a central channel that contains cells, and two side channels that act as model capillaries. The potential for variation of the interstitial fluid pressure was determined by measuring the resistances with respect to the various channels. It was determined that the unmodified device is incapable of mimicking physiological tumor pressures. The ability to vary pH was performed by using a pH sensitive florescent and by infusing a pH 5.9 solution into the side channels, before checking if the device could maintain this pressure for a long time period during constant perfusion of media into the device. It was observed that the florescence of the pH sensitive molecule decreased upon infusion of an acidic solution, as it should upon exposure to acid. However, no conclusions can be drawn from these tests, as the florescent molecule was no longer viable after the 12 hour perfusion of media. Further experiments are needed before any conclusions can be reached about the device's potential.