"Colonizers are born, not made": Creating a Colonialist Identity in Nazi Germany, 1933-1945 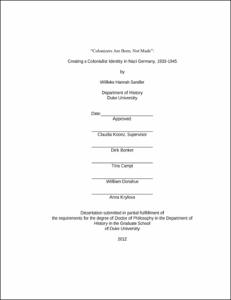 After the First World War, Germany lost its overseas territories, becoming Europe's first post-colonial nation. After 1919, and especially between 1933 and 1945, however, German colonialists advocated for the return of these colonies and for their central importance to Germany. This dissertation tells the paradoxical story of these colonialists' construction of a German national character driven by overseas imperialism despite the absence of a colonial reality to support this identity. In contrast to views of colonialism as marginal in Germany after the First World War or the colonialist organizations as completely subsumed under the Nazi regime, this dissertation uncovers both the colonialist organizations' continuing public presence and their assertive promotion of their overseas goals in the Third Reich. It also reveals the space available for debates over the contours of national identity in the public sphere of the Third Reich.

Using organizational records of colonialist groups and Nazi propaganda offices, the colonialist press and other publications, photography, graphics, films, and public opinion reports, this dissertation examines the vibrant two-million-strong colonial revisionist movement that flourished in the Third Reich. German colonialists, straddling between anachronistic fantasy and the National Socialist world-view, reintegrated overseas imperialism into Nazi Germany and thereby reinterpreted the meaning of Germanness. They proclaimed a new vision of German national identity that drew on the imagined glories of the past but also held out the promise of a revitalized future for Germany through Africa. They did so however in conflict with the Nazi regime's expansionist goals in Eastern Europe. Colonialists, however, elided disagreements in favor of projecting a public image that emphasized the deep interconnectedness of overseas colonialism and Nazi goals. Through their public agitation and cultural products, colonialists affirmed the continuing relevance of overseas colonialism to Germans in the Third Reich.