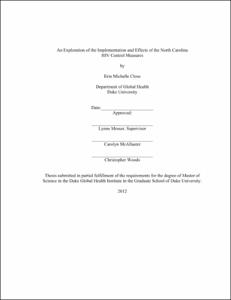 Since the beginning of the AIDS epidemic, governmental authorities across the country have attempted to legislate the behavior of HIV-positive individuals. North Carolina's HIV Control Measures--administrative regulations promulgated by the North Carolina Commission for Public Health--exemplify this type of legislative endeavor. The North Carolina Legislature gave the North Carolina Commission for Public Health statutory authority to promulgate control measures for HIV/AIDS. The resulting HIV Control Measures ("control measures") are rules that govern the actions of HIV-positive individuals, their physicians, their partners, and state health officials that are meant to limit the spread of the disease. While these control measures were implemented to accomplish legitimate public health objectives, there is very little research evaluating the extent to which they have fulfilled, or failed to fulfill, these goals.

This project represents the beginning of an exploration of the ways that the control measures affect the behavior of HIV-positive individuals in North Carolina. This study used a combination of qualitative interviews, legal research, and document review to better understand the on-the-ground implementation of the control measures and the ways that they affect the public health of both HIV-infected and HIV-uninfected individuals in the state. The results of the study include a consideration of the positive duties required of HIV-infected individuals under the control measures. Additional themes, such as recent scientific data on HIV treatment and the effect of the Internet on HIV generally, are also explored. Finally, overall thematic conclusions are offered and suggestions for subsequent explorations are presented.