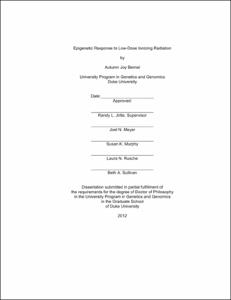 Low-dose ionizing radiation (LDIR) exposure (under 10.0 centigray (cGy)) from man-made sources, such as diagnostic imaging, predominates in the US population and comprises nearly 50% of an average individual's yearly radiation exposure (Ullrich, Brooks et al. 2009). The increase in such exposures has led to public and government alarm about the impact of LDIR on human health (Ullrich, Brooks et al. 2009). Besides the mutational effects of radiation exposure, there is concern it might also result in modifications of the epigenome. Such aberrations can disrupt normal development and are involved in the progression of numerous diseases, including cancer (Gasser and Li 2011). High doses of radiation (>100.0 cGy) have been shown to cause epigenetic disruption (Kaup, Grandjean et al. 2006; Tamminga, Koturbash et al. 2008; Ilnytskyy, Koturbash et al. 2009), which is necessary for the persistence of radiation-induced genomic instability (Rugo, Mutamba et al. 2011); however, it is presently unclear to what extent LDIR in vivo alters the epigenome.

The viable yellow agouti (Avy) mouse was used here to characterize the dose-dependent epigenetic response to LDIR. The Avy mouse is a unique biological model that functions as a biosensor for environmentally induced epigenetic changes and disease susceptibility due to the presence of a metastable epiallele that modulates coat color (Waterland and Jirtle 2003). Pregnant dams were whole-body exposed to one of five doses of X-ray radiation ranging from 0-10.0 cGy on gestational day 4.5. Using a phantom mouse model, the intrauterine doses were estimated to be 0.0 cGy, 0.4 cGy, 0.7 cGy, 1.4 cGy, 3.0 cGy, and 7.6 cGy, respectively. At weaning, offspring coat colors were assessed and tissues were collected for methylation analysis. First, methylation changes at CpG sites in the Avy and Cdk activator binding protein (CabpIAP) metastable epialleles and at intracisternal a particle (IAP) elements across the genome were quantified using Sequenom technology. Second, three imprinted genes, Peg3, Nnat, and H19, were assessed for methylation changes in differentially methylated regions (DMRs) that regulate their parent-of-origin monoallelic expression using Sequenom technology. Lastly, it was postulated that the epigenetic changes at the Avy locus could be counteracted with dietary alterations. To test this hypothesis, female mice were placed on an antioxidant-supplemented diet prior to pregnancy and throughout gestation and lactation. Pregnant dams were irradiated with 3.0 cGy of whole-body X-rays. Offspring coat colors were assessed and methylation changes at the Avy allele were measured with the Sequenom platform.

Herein, I demonstrate that in utero LDIR exposure induced epigenetic changes in the Avy mouse in a dose-dependent and sex-specific manner. Acute, whole-body exposure to 0.7 cGy, 1.4 cGy, 3.0 cGy or 7.6 cGy X-rays significantly shifted offspring coat color distribution toward pseudoagouti. Acute exposure to 1.4 cGy, 3.0 cGy, and 7.6 cGy significantly increased methylation at multiple CpG sites in the Avy metastable epiallele in male offspring, but not female offspring. Methylation changes at DMRs in Nnat, Peg3, and H19 also occurred in a dose-dependent manner. Furthermore, inhibition of the phenotypic and Avy methylation changes with an antioxidant-supplemented diet suggests that the mechanisms to induce epigenetic changes are mediated by oxidative stress. These results demonstrate that relevant, low doses of radiation can elicit epigenetic changes that lead to a persistent phenotype, but can be mitigated with dietary supplementation. The successful completion of this project has resulted in the first in vivo epigenetic characterization of LDIR exposure and will contribute to the development of more relevant risk assessment strategies for protecting human populations.