Essays in Economics of Crime 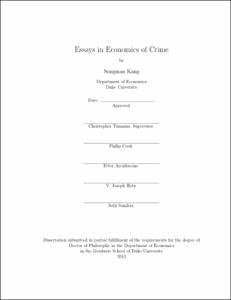 This dissertation consists of three essays in economics of crime. The first chapter examines the relationship between economic inequality and crime, and provides a new theoretical explanation and empirical evidence. Economists traditionally explained the empirical relationship between inequality and crime in terms of differentials in potential criminal gains. As inequality increases, low-income individuals are likely to be left with little increase in their legitimate earnings potential but much larger increases in potential criminal gains, because there are now more wealthy potential victims who possess goods worth taking. This increase in potential criminal gains for the disadvantaged population then results in higher crime rates. While simple and intuitive, this explanation is inconsistent with the high concentration of crime victimization among the poor who offer the least potential gains to offenders. After a careful empirical analysis using recent panel data on large U.S. counties, I find evidence that the previously-reported empirical link between inequality and crime at the county-level masks two opposing effects of economic inequality underneath; crime is positively linked with economic segregation across neighborhoods, but negatively correlated with local inequality. One immediate implication of this finding is that introducing greater economic inequality, or income variability, in highly disadvantaged neighborhoods may reduce local crime, instead of increasing crime.

The last chapter, a joint work with Professor Philip Cook, explores the relationship between school entry age, education and crime. It has been well-documented that students who are older than their classroom peers tend to outperform their younger peers in standardized tests. On the other hand, older students are also associated with a higher rate of high school dropout, likely due to the presence of the age threshold after which students are allowed to drop out from school. Given the strong relationship between education and crime, it is of great interest the extent to which the relative educational advantages and disadvantages associated with students' relative age influences their criminal outcomes. Our analyses exploit a plausibly exogenous variation in the age in which students are enrolled in third grade, caused by the minimum age requirement for school entry in North Carolina. Based on the sample of North Carolina students, we find strong evidence that students who are relatively older than their classroom peers tend to do better in standardized reading and math tests and are more likely to be enrolled in advanced courework during the periods of primary and secondary education. Consistent with the gap in academic achievement while at school, children who are relatively older are less likely to be involved in criminal offense as juveniles. On the other hand, we also document that relatively older students are less likely to graduate from high school, and have a higher likelihood of offending as adults, likely reflecting the difference in the level of educational attainment. Our finding that the timing of school entry are associated with important costs and benefits in children's educational and criminal outcomes may have important policy implications on the optimal school entry and exit ages.