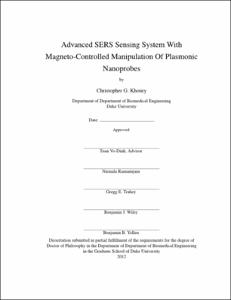 There is an urgent need to develop practical and effective systems to detect diseases, such as cancer, infectious diseases and cardiovascular diseases.

Nanotechnology is a new, maturing field that employs specialized techniques to detect and diagnose infectious diseases. To this end, there have been a wealth of techniques that have shown promising results, with fluorescence and surface-enhanced Raman scattering being two important optical modalities that are utilized extensively. The progress in this specialized niche is staggering and many research groups in academia, as well as governmental and corporate organizations, are avidly pursuing leads which have demonstrated optimistic results.

Although much fundamental science is still in the pipeline under the guise of both ex-vivo and in-vivo testing, it is ultimately necessary to develop diagnostic devices that are able to impact the greatest number of people possible, in a given population. Such systems make state-of-the-art technology platforms accessible to a large population pool. The development of such technologies provide opportunities for better screening of at-risk patients, more efficient monitoring of disease treatment and tighter surveillance of recurrence. These technologies are also intrinsically low cost, facilitating the large scale screening for disease prevention.

Fluorescence has long been established as the optical transduction method of choice, because of its wealth of available dyes, simple optical system, and long heritage from pathology. The intrinsic limitations of this technique, however, have given rise to a complementary, and more recent, modality: surface-enhanced Raman scattering (SERS). There has been an explosive interest in this technique for the wealth of information it provides without compromising its narrow spectral width.

A number of novel studies and advances are successively presented throughout this study, which culminate to an advanced SERS-based platform in the last chapter.

The finite element method algorithm is critically evaluated against analytical solutions as a potential tool for the numerical modeling of complex, three-dimensional nanostructured geometries. When compared to both the multipole expansion for plane wave excitation, and the Mie-theory with dipole excitation, this algorithm proves to provide more spatially and spectrally accurate results than its alternative, the finite-difference time domain algorithm.

Extensive studies, both experimental and numerical, on the gold nanostar and Nanowave substrate for determining their potential as SERS substrates, constituted the second part of this thesis. The tuning of the gold nanostar geometry and plasmon band to optimize its SERS properties were demonstrated, and significant 3-D modeling was performed on this exotic shape to correlate its geometry to the solution's exhibited plasmon band peak position and large FWHM. The Nanowave substrate was experimentally revived and its periodic array of E-field hotspots, which was until recently only inferred, was finally demonstrated via complex modeling.

Novel gold- and silver- coated magnetic nanoparticles were synthesized after extensive tinkering of the experimental conditions. These plasmonics-active magnetic nanoparticles were small and displayed high stability, were easy to synthesize, exhibited a homogeneous distribution, and were easily functionalizable with Raman dye or thiolated molecules.

Finally, bowtie-shaped cobalt micromagnets were designed, modeled and fabricated to allow the controllable and reproducible concentrating of plasmonics-active magnetic nanoparticles. The external application of an oscillating magnetic field was accompanied by a cycling of the detected SERS signal as the nanoparticles were concentrated and re-dispersed in the laser focal spot. This constituted the first demonstration of magnetic-field modulated SERS; its simplicity of design, fabrication and operation opens doors for its integration into diagnostic devices, such as a digital microfluidic platform, which is another novel concept that is touched upon as the final section of this thesis.