Making Sense of Normative Functions and Information in Neurobiological Systems 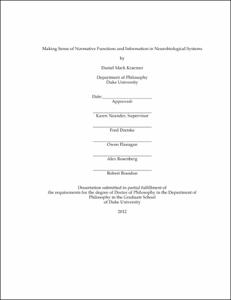 In this thesis, I take up two important issues for understanding neurobiological systems: normative functions and information. After introducing the topic and my methodology in chapters 1 and 2, chapter 3 contains an extended critique of the most prominent theory of biological functions, the selected-effects theory of functions. My arguments center on the influential recent selected-effects theory arguing that it has trouble accounting for certain cases and does not seem to capture the sense of malfunction employed in the neurosciences. Chapter 4 defends an alternative theory of normative biological functions that I label the statistical fitness theory. Roughly, this theory holds that tokens of a trait type have the normative function to do something y if it is typical for tokens of that type of trait to y and their doing y contributes to the inclusive fitness of the organism that possesses the trait. In turn, this theory defines malfunctioning trait tokens as those whose effects that typically make positive contributions to fitness fall below the "normal" range in the population. Chapter 5 argues that several other recently popular theories of normative functions have significant flaws.

Chapter 6 takes up the issue of a certain kind of information, namely natural, propositional information. I provide a general framework that explains when signals carry this kind of information about their signifieds based upon stable, perfect correlations holding between the two. Hence, I label this the "stable correlation theory". I also argue that there are good reasons to think that neurons in our brains carry natural, propositional information and that their ability to do so is also grounded in stable correlations.