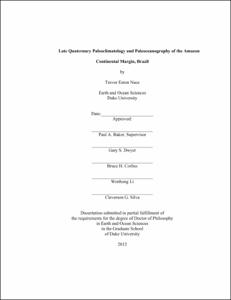 The tropics are a significant source of heat and moisture export, which drive global circulation patterns, thus it is vital to systematically understand the land, ocean and sedimentological interactions within the tropics. The Brazilian continental margin is an ideal region to characterize the tropics due to its unique local oceanography and proximity to the atmospheric engine that is the Amazon Basin. A combination of: 1) terrestrial organics and hydrology; 2) oceanographic temperature, isotopic composition, and salinity and 3) early diagenesis and geochemistry of sedimentary interstitial water and methane hydrate, provide a detailed understanding of the primary constituents that influence the South American tropics.

Sedimentological, organic and paleoceanographic reconstructions of the Amazon Basin, Brazilian Nordeste, and western equatorial Atlantic have been undertaken on two sediment cores located on the Brazilian continental slope representing 30 and 110 ka, respectively. High-resolution XRF analyses of Fe, Ti, K and Ca are used to define the sedimentological history of the Amazon Basin and northern Nordeste. Here we present elemental ratios of Ti/Ca and Fe/K, in addition to magnetic susceptibility, to determine variability in Amazon Basin and Nordeste hydrology. Bulk organic proxies d13C and d15N of sedimentary organic carbon are used to define the organic history of the Amazon Basin. Peaks in Ti/Ca and Fe/K ratios largely correlate in both the Amazon Basin and in the Nordeste Record. These excursions correlate with commonly modeled global slowdown of the Atlantic meridional overturning circulation (AMOC) during increased northern hemisphere glaciation. Differences in the Fe/K and Ti/Ca records suggest periods of increased chemical weathering independent of precipitation driven sediment discharge in the Brazilian Nordeste. Bulk organic geochemistry indicates the vegetative history of the Amazon Basin has been relatively stable during the late Quaternary.

High-­resolution stable oxygen isotopic analysis and Mg/Ca paleothermometry undertaken on the near-­surface-dwelling planktic foraminiferal species Globierinoides ruber provide a picture of paleoceanographic forcings in the western equatorial Atlantic. The Nordeste core exhibits a rapid warming of ~3.5ºC between the last glacial maximum and the early Holocene. Furthermore, in almost all cases during the last glacial stage, there was a 0.5 to 2ºC warming of the western equatorial Atlantic during the periods of high Ti/Ca ratios that correlate with slowdown of AMOC. Thus, as observed in some previous studies, the western equatorial Atlantic was warm and the adjacent southern tropical continent was wet coincident with increased glaciation in the high latitude northern hemisphere.

Through multiple lines of evidence it is likely that there is extensive methane hydrate occurrence on the Amazon continental shelf. A combination of: 1) A rapid linear decline in sulfate at an unusually shallow depth; 2) Uncommonly high sedimentation rates and terrestrial organic carbon input; 3) Significant variability in what should be conservative chloride concentrations; 4) Large variability in interstitial oxygen isotopes; 5) Widespread occurrence of BSRs provide substantial support for the presence of methane hydrates. Sulfate reduction rates are lowest along the main Amazon channel, with highest values distal of the main channel. Sedimentation rates are relatively low on the continental shelf and surrounding the main channel and highest toward the distal end of the main channel. Sulfate reduction rates provide key insights to the potential geographic variability of methanogenesis and methane hydrate formation. Given the tremendous influx of sediment from the Amazon River, this region is prone to massive sediment failures, subsequent release of methane hydrates, as well as significant potential for natural gas hydrates.