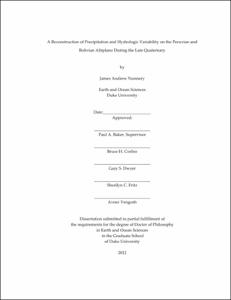 The Peruvian/Bolivian Altiplano is an important hydrologic system for paleoclimate reconstruction because it is unique in its ability to record climate variability associated with the near-continental scale South American summer monsoon (SASM), which is responsible for much of the precipitation over the Amazon basin and the southern subtropics. Over long timescales moisture on the Altiplano fluctuates in intensity due to changes in precessional insolation forcing as well as teleconnections to decadal-to-millennial scale abrupt temperature shifts in the Northern hemisphere Atlantic. These long-term changes in moisture transport to the Altiplano have been observed in multiple paleoclimate records, including drill core records and paleo-lake level records, as apparent advances and retreats of large lakes in the terminal basin occupied by the Salar de Uyuni and the Salar de Coipasa.

Presented here are the results from three studies that utilize different methods to create a refined reconstruction of paleohydrology, as well as paleoclimate, on the Altiplano. A major goal of this research is a more detailed understanding of millennial scale climate variability as it relates to insolation changes and abrupt warming and cooling in the north Atlantic. The first study discusses the creation of a paleohydrologic profile to reconstruct north-south hydrological history using previously reported lake core sediment records the northern and southern basins of the Altiplano, and a new 14 m core from the Salar de Coipasa representing the last ~45 ka. The second study uses a terrestrial hydrology model to simulate lake level changes through time given changes in precipitation and temperature. The third study uses strontium isotopic measurements of carbonates and halites in a 220-m core from the Salar de Uyuni to determine how source waters to the southern basin have changed through time.

The paleohydrologic profile in the first study is constructed using records from three major basins within the Altiplano: Lake Titicaca in the north, and Salar de Coipasa and Salar de Uyuni in the south. The new continuous sediment core from Salar de Coipasa indicates a lake that has fluctuated between deep and shallow phases for the last 45 ka. Lacking sufficient calcium carbonate, we instead take advantage of the general correlation between d18O and d13C in closed basin lakes to approximate water balance using d13C from organic carbon. This reconstruction is validated with diatom paleoecological records. The isotope measurements and diatom records indicate that from 45-36 ka Coipasa was moderately deep, consistent with paleoshoreline evidence of paleolake Minchin (46-36 ka). From 36-26 ka a shallow lake <10 m deep occupied the Coipasa basin. During the LGM (26-21 ka) the lake varied from moderate to shallow and during the Holocene (< 10 ka) the lake evolved from a shallow lake to a salt flat.

The hydrologic model in the second study was run through many scenarios including increases in precipitation, decreases in temperature, and combinations of the two. During the LGM southern Altiplano lakes fluctuated between 3,660 - 3,700 masl. Model results suggest that during this period basin wide precipitation increased up to 250 mm/yr compared to modern values dependent on a temperature decrease of 5 °C relative to modern values. To create a lake at elevation 3,760 masl consistent with the highest paleolake phase (Tauca, ~16 ka) the model requires an increase of 350 mm/yr compared to modern values dependent on a 5 °C decrease in temperature (relative to modern values). An increase in temperature alone of 2 °C above modern values causes Lake Titicaca water level to decrease ~30 m, creating a closed basin lake. Results indicate that Lake Titicaca outflow is necessary to sustain large lakes in the southern basin, providing ~40-60% of total input via the Rio Desaguadero.

Analysis of a 220 m core from the Salar de Uyuni suggests periods of alternating wet and dry phases (indicated by alternating mud and salt units respectively) at the salar. Evident in the record is a transition at ~60 ka from sediments consistent with dry conditions ("playa lakes") to sediments consistent with deep lakes ("great lakes"). It has been shown that rivers and lakes in the Bolivian and Peruvian Altiplano display a range of Sr isotopic ratios that can be connected to the lithologies of specific drainage basins. Measurements of Sr ratios of the alternating halites and carbonate sediments are used to determine when paleolakes in the Salar were supplied by flow from the northern and central basins of the Altiplano, and when they were more a product of increased precipitation in the Uyuni basin. The results from Sr isotope analysis suggest that prior to ~60 ka the primary source of Sr to the Uyuni was local runoff and direct precipitation. Following the state change from the "play lakes" phase to the "great lakes" phase Sr isotope measurements suggest a significant influence from more radiogenic waters originating in the central and northern Altiplano basins. The reason for this state change is attributed to a combination of a general increase in precipitation following the onset of the MIS-4 (~70 ka) glacial period and downcutting of the Laka Jahuira hydrologic divide, which connects Lago Poopó in the central basin to the Salar de Coipasa.

This approach of reconstructing hydrology using the combination of multiple paleolake records, hydrological modeling, and isotopic tracers allows for a better understanding of how precipitation and temperature changes affect the advance and retreat of large lakes on the Altiplano, and ultimately a more accurate understanding of how decadal-to-millennial forcings influence the climate of the subtropical Andes.