Building a Better World: Youth, Radicalism, and the Politics of Space in New York City, 1945-1965 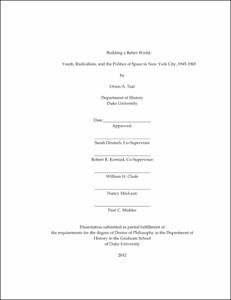 According to conventional wisdom, the period of intense antiradicalism that followed World War II effectively drove all radical activity underground by the early 1950s, severing the intergenerational connection between the "Old Left" of the Great Depression era and the "New Left" of the 1960s. Building a Better World revises this narrative by examining how radical activists in New York City carved out space for young people's participation in leftwing political culture between 1945 and 1965. Contrary to most studies of the postwar Red Scare that focus on the Left's decline, this study tells a story of survival. Despite concerted efforts by social critics and governmental officials to curtail radicals' political influence among the young, radicals maintained a surprisingly robust radical social world centered in summer camps, private schools, youth groups, cultural organizations, union halls, and homes throughout New York City and its environs. In these spaces, youth continued to absorb a radical worldview that celebrated the labor movement, decolonization struggles, and African Americans' quest for freedom, while forwarding a biting critique of American capitalism. This process of intergenerational transmission would not have been possible without access to social space and an ever-evolving interpretation of radical values responsive to changes in political culture and demographics. Building a Better World relies on extensive archival research, print material, visual sources, and original oral histories to document this hidden history. In so doing, the dissertation significantly revises our understanding of the American Left, the history of American childhood, spatial change in New York City, and the evolution of political, ethnic, and racial identities in modern American history.