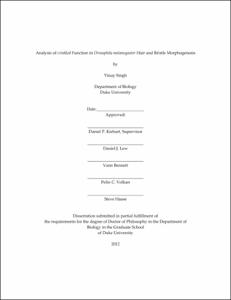 Mutations in myosin VIIa (MyoVIIa), an unconventional myosin, have been shown to cause Usher Syndrome Type 1B in humans. Usher Syndrome Type 1B is characterized by congenital sensorineural deafness, vestibular dysfunction and pre-pubertal onset of <italic>retinitis pigmentosa</italic>. Mouse model studies show that sensorineural deafness and vestibular dysfunction in MyoVIIa mutants is caused by disruption in the structure of microvilli-like projections (stereocilia) of hair cells in the cochlea and vestibular organ. MyoVIIa has also been shown to affect adaptation of mechanoelectrical transduction channels in stereocilia.

In <italic>Drosophila melanogaster</italic> mutations in MyoVIIa encoded by <italic>crinkled (ck)</italic> cause defects in hair and bristle morphogenesis and deafness. Here we study the formation of bristles and hairs in <italic>Drosophila melanogaster</italic> to investigate the molecular basis of ck/MyoVIIa function and its regulation. We use live time-lapse confocal microscopy and genetic manipulations to investigate the requirement of ck/MyoVIIa function in various steps of morphogenesis of hairs and bristles. Here we show that null or near null mutations in ck/MyoVIIa lead to the formation of 8-10 short and thin hairs (split hairs) per epithelial cell that are likely the result of the failure of association of hair-actin bundles that in wild-type cells come together to form a single hair.

The myosin super family of motor proteins is divided into 17 classes by virtue of differences in the sequence of their motor domain, which presumably affect their physiological functions. In addition, substantial variety in the overall structure of their tail plays an important role in the differential regulation of myosin function. In this study we show that ck/MyoVIIa, that has two MyTH4 FERM domains in its tail separated by an SH3 domain, requires both MyTH4 FERM repeats for efficient association of hair-actin bundles to form hairs. We also show that the "multiple hair" phenotype of over-expression of ck/MyoVIIa requires both MyTH4 FERM domain function but not the tail-SH3 domain. We further demonstrate that the tail-SH3 domain of ck/MyoVIIa plays a role in keeping actin bundles, which run parallel to the length of the growing bristle, separate from each other. Our data also suggests that the tail-SH3 domain plays a role in the association of the actin filament bundles with the membrane and regulates F-actin levels in bristles.

Together our results show that ck/MyoVIIa plays an important role in regulating the actin cytoskeleton that underlies actin-based cellular protrusions like hairs and bristles.