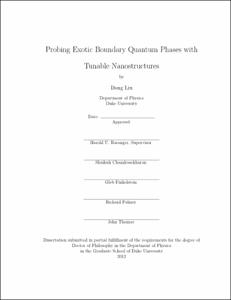 Boundary quantum phases ---a special type of quantum phenomena--- occur in the boundary part of the system. The boundary part can be a surface of a bulk material, an interface between two distinct system, and even it can be a single impurity or a impurity cluster embedded into a bulk system. The properties of the boundary degree of freedom can be affected by many strong electron correlation effects, mesoscopic effects, and topological effects, which, therefore, induce a vast variety of exotic boundary quantum phases. Many techniques for precise fabrication and measurement in nanostructures had been developed,

which can provide ways to prob, understand, and control those boundary quantum phases.

In this thesis, we focus on three types of the boundary quantum phases : Kondo effects, boundary quantum phase transitions, and Majorana fermions. Our motivation is to design and prob those effects by using a important type of nanostructures, i.e. quantum dots. A vast variety of models related to quantum dots (QDs) are studied theoretically, which includes a QD coupled to a mesoscopic bath, a quadruple QD system with metallic leads, a QD with dissipative environments, and a QD coupled to a Majorana fermion zero mode.

Quantum dots provide a way to study the interplay of Kondo effects and mesoscopic fuctuations. In chapter 5, we consider a model including an Anderson impurity (small QD) coupled to a mesoscopic bath (large QD). Both the weak and strong coupling Anderson impurity problems are characterized by Fermi-liquid theories with weakly interacting quasiparticles. We find that the fluctuations of single particle properties in the two limits are highly correlated and universal : The distributions of the spectrum within the Kondo temperature collapse to universal forms; and the strong coupling impurity changes the wave functions corresponding to the spectrum within the Kondo temperature.

Quantum dots also bring the possibility to study more complex quantum impurities (multi-QDs) and the competition among dierent interactions, which may induce exotic effects: boundary quantum phase transitions and novel Kondo effects. In chapter 7, we design a quadruple quantum dot system to study the competition among three types of interactions: Kondo, Heisenberg, and Ising. We find a rich phase diagram containing two sharp features : a Berezinsky-Kosterlitz-Thouless type quantum phase transition between a charge-ordered phase and a charge liquid phase and a U(1)XU(1) Kondo state with emergent symmetry from Z2 to U(1). In chapter 8, we study a dissipative resonant level model in which the coupling of a fermionc bath competes with a dissipation-induced bosonic bath. we establish an exact mapping from this dissipative resonant level model to a model of a quantum dot embedded into a Luttinger liquid wire, and we also find two kinds of boundary quantum phase transitions (a Berezinsky-Kosterlitz-Thouless type and a second order type).

Finally, in chapter 9, we propose an experimental system to detect Majorana fermion zero modes. This system consists of a spinless quantum do coupled to a Majorana fermion which exists in the end of a p-wave superconductor wire. The Majorana Fermion strongly infuence the transport properties of the quantum dot. The zero temperature conductance peak value (when the dot is on resonance and symmetrically coupled to the leads) is e^2/2h. In contrast, if the wire is in its topological trivial phase, the result is e^2/h; if the side-coupled mode is a regular fermionic zero mode, the result is zero. Driving the wire through the topological phase transition causes a sharp jump in the conductance by a factor of 1/2. This result can be used to detect the existence of Majorana fermions.