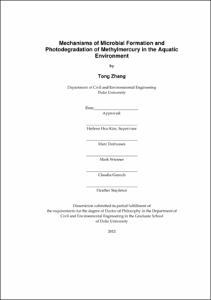 Methylmercury is a bioaccumulative neurotoxin that severely endangers human health. Humans are exposed to methylmercury through consumption of contaminated aquatic fish. To date, effective strategies for preventing and remediating methylmercury contamination have remained elusive, mainly due to the lack of knowledge in regard to how methylmercury is generated and degraded in the aquatic environment. The goal of this dissertation was to study the mechanisms of two transformation processes that govern the fate of methylmercury in natural settings: microbial mercury methylation and methylmercury photodegradation. The role of mercury speciation (influenced by environmental conditions) in determining the reactivity of mercury in these biological and photochemical reactions was the focus of this research.

Methylmercury production in the aquatic environment is primarily mediated by anaerobic bacteria in surface sediments, particularly sulfate reducing bacteria (SRB). The efficiency of this process is dependent on the activity of the methylating bacteria and the availability of inorganic divalent mercury (Hg(II)). In sediment pore waters, Hg(II) associates with sulfides and dissolved organic matter (DOM) to form a continuum of chemical species that include dissolved molecules, polynuclear clusters, amorphous nanoparticles and after long term aging, bulk-scale crystalline particles. The methylation potential of these mercury species were examined using both pure cultures of SRB and sediment slurry microcosms. The results of these experiments indicated that the activity of SRB was largely determined by the supply of sulfate and labile carbon, which significantly influenced the net methylmercury production in sediment slurries. The availability of mercury for methylation decreased during aging. Dissolved Hg-sulfide (added as Hg(NO3)2 and Na2S) resulted in the highest methylmercury production. Although the methylation potential of humic-coated HgS nanoparticles decreased with an increase in the age of nanoparticle stock solutions, nano-HgS was substantially more available for microbial methylation relative to microparticulate HgS, possibly due to the smaller size, larger specific surface area and more disordered structure of the nanoparticles. Moreover, the methylation of mercury derived from nanoparticles cannot be explained by equilibrium speciation of mercury in the aqueous phase (<0.2 <em>f</em>Ým, the currently-accepted approach for assessing mercury bioavailability for methylation). Instead, the methylation potential of mercury sulfides appeared to correlate with the extent of dissolution and their reactivity in thiol ligand exchange. Additionally, partitioning of mercury to a diverse group of bulk-scale mineral particles and colloids (especially FeS) may be an important process controlling the mercury speciation and subsequent methylmercury production in natural sediments.

Overall, this dissertation has demonstrated that chemical speciation of inorganic mercury and methylmercury determines their availability for microbial methylation and sunlight degradation, respectively. The abundance of these available mercury species is influenced by a variety of environmental parameters (e.g., DOM). This dissertation work contributes mechanistic knowledge toward understanding the occurrence of methylmercury in the aquatic environment. This information will ultimately help construct quantitative models for accurately predicting and assessing the risks of mercury contamination.